His Holiness the Karmapa addresses the conference by video feed. Image courtesy of the author

For two days at the end of May an international group of Buddhist scholars, students, and practitioners, both lay and ordained, gathered at the University of Toronto for a single purpose: to support female practitioners of Buddhism across traditions, and to bolster efforts to restore full bhikshuni ordination to the lineages of Tibetan Buddhism. It was this project, one most sacred to His Holiness the 17th Gwalwang Karmapa, Orgyen Trinley Dorje, that drew more than 50 participants, including a robust cohort of volunteers from across Canada, parts of the United States, and Asia.

Entitled “Awakening,” the forum was hosted by the Great Compassion Bodhi Prajna Temple and the North American Karma Kagyu Bhikkhuni Institute (NAKKBI), with support from The Robert H. N. Ho Family Foundation Centre for Buddhist Studies at the University of Toronto. For two days, participants held discussions, heard lectures, and were blessed with a special message delivered via video feed from His Holiness the Karmapa on the importance of supporting women on the Buddhist path to awakening.

In her opening remarks, Dr. Frances Garrett, inaugural director of the Ho Centre for Buddhist Studies at the University of Toronto offered: “We are here to understand, encourage, and celebrate the roles of women in Buddhism.” She noted Toronto’s significant in hosting the forum, due in part to it being one of the most religiously diverse cities in world. Toronto is home to a large Tibetan community, and an ethnic Chinese community that makes up 11 per cent of the population. A large proportion of both communities are Buddhist, with a number of temples in and around the city.

After a keynote address by Ven. Bhikkhuni Miao Jing, founder of the Great Compassion Bodhi Prajna Temple and the NAKKBI, all present were invited to hear the video message from the Karmapa. His Holiness began by observing that a majority of the world’s population is female and that most of these women engage in some form of spiritual practice. Therefore, His Holiness explained, we should do all we can to support women in their practices, to the fullest extent possible for the benefit of all sentient beings. The forum commenced with direct blessings to empower all women so that they can awaken, true to the name of the forum, bringing the many diverse participants together in alignment with this single purpose. And for the next two days, all proceeded to discuss and share how they see female empowerment in Buddhism manifesting, and what can be done to move this intention forward.

Ven. Bhikkhuni Yi Fa, founder of Woodenfish Foundation, also gave a keynote speech that was ripe with insights from this master’s decades of experience bringing and supporting Buddhism in the West. Originally from Taiwan, and having spent many years tirelessly serving Buddhism in the West, she now resides in Beijing, where she focuses on international exchange programs.

A particular highlight was a presentation by the scholar-nun Ven. Changshen Shih, a recent fellow at Harvard University and currently residing at Dharma Drum Monastery in Taiwan, who offered a meticulously researched presentation on the bhikshuni lineage in the US and the emerging bhikshuni sangha in the West. Exploring how the first bhikshuni ordination occurred or was revived in places outside of Indian Buddhism, she offered a comprehensive critique tracing characteristics of the bhikshuni lineage in the West along its historical lines. One of the findings she shared was that Western Buddhist monastic sanghas have shown a preference for establishing a bhikshuni sangha first, instead of focusing on a particular Buddhist tradition. For example, as bhikshuni ordination has not yet been fully restored in Tibetan Buddhism, Changshen observed that Western nuns practicing in the Tibetan tradition have often sought Dharmaguptaka bhikshuni ordination, a bhikshuni vinaya lineage in Mahayana buddhism. In conclusion, she shared that the future could see Western bhikshuni sanghas—mostly Tibetan Buddhist traditions—dissolving the boundaries between Buddhist traditions that are typically seen in Asia. 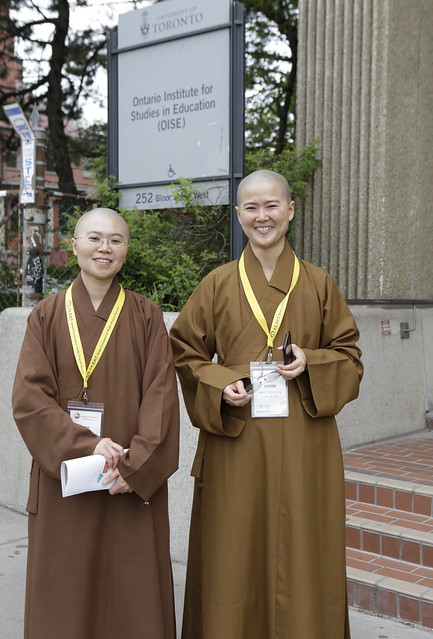 Two academic presentations from professors of Buddhism from the University of Toronto stood out for their astute insights and scholarly precision. Dr. Garrett shared this about the papers:

An exciting new paper by our alumna Dr. Jennifer Bright introduced research on Buddhist nuns who were also doctors, or who studied medicine, in Tibet and other Himalayan regions. Very little has been published on the role of women as scholars and practitioners of Tibetan medicine, and so Dr. Bright’s work is really groundbreaking. She is tracing the contributions of these women with a particular eye to how Tibetan medical texts may begin to describe women’s bodies and women’s health differently as more women become authors. Another student from our program, Barbara Hazelton, presented research on sacred sites associated with Yeshe Tsogyal, based on new translations of Tibetan biographies of this important female figure. Barbara’s work is demonstrating the special connections between women saints or feminine power and sites that feature water, such as springs or lakes. While there is quite a bit of secondary scholarship on the sacred qualities of Himalayan mountains, water sites have been understudied, which makes Barbara’s research especially exciting.

To maintain the connections formed during this year’s forum, participants were encouraged to sign a declaration covering six points that the conference organizers deemed to be most relevant to the topic of female empowerment in contemporary Buddhism. The Forum Declaration Statement included committing to inspire compassion and wisdom in female practitioners, bringing awareness of the significant roles female practitioners play in global Buddhism, and enabling the Buddhadharma to flourish and spread in order to “bring living beings happiness and the ultimate benefit of liberation.”

When Dr. Garrett was asked why the Ho Centre For Buddhist Studies had offered support for the First International Buddhist Bhikkhuni Forum, she explained: “We recognized the importance of the event and were eager to work with NAKKBI to host it on our campus. Bhikkhunis historically and around the world have been under-supported, despite the many substantial contributions nuns and lay women have made, and continue to make, in all Buddhist cultures. This forum can help us become more aware of the roles of women in Buddhism and support women's study and practice.” 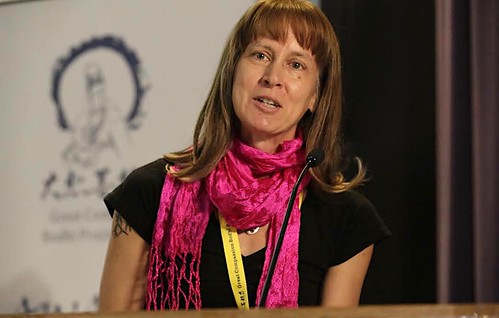 The next forum will be held in three years, with planning slated to take place in August. The Ho Centre for Buddhist Studies will again host the forum, with Dr. Garrett sharing these words on the next step: “We will look forward to working with NAKKBI on the next forum, when we hope to widen representation of bhikkhuni from all traditions, plus lay people and scholars who are interested in learning more about and presenting new research on the contributions of women in Buddhism.”

Nuns in the Tibetan Tradition: Latest Developments and Future Prospects
Reviving the Bhikkhuni Sangha in Indonesia: an Interview with Ayya Santini
Exclusive Interview: The 17th Karmapa and the Buddhist Nuns of the Tibetan tradition