HH Penor Rinpoche at Namdroling Monastery, Bylakuppe, Mysore, 1981. By Chris Fynn.
Following the passing into parinirvana of the beloved master, His Holiness Penor Rinpoche, on the evening of 27 March 2009, prayers for his swift rebirth were chanted by students around the world.
The fulfillment of those prayers was marked on 31 July this year when the enthronement ceremony of Pema Dorjee, recognized as the reincarnation of His Holiness, took place. This date corresponded to the fourth day of the sixth Tibetan month, an auspicious day marking the time of the Buddha’s first teaching after his enlightenment. In accordance with Penor Rinpoche’s wishes, his successor took seat as the invested 13th throne-holder in Palyul monastery, eastern Tibet. For the students of the late Penor Rinpoche, this event has been a deeply moving and natural progression, securing the future of the Palyul lineage of the Nyingma tradition.
Penor Rinpoche was the revered 11th throne-holder of Palyul, one of the six “mother monasteries” belonging to the Nyingma school, Tibet’s oldest Buddhist tradition. Following his passing, Rinpoche’s student Karma Kuchen Rinpoche served as the throne-holder of the lineage until the instatement of Rinpoche’s incarnation (yangsi). The traditional search to find the yangsi was overseen by a carefully selected committee that included Karma Kuchen Rinpoche, who acted in accordance with a “prophecy letter” sent by the 100-year-old Dzogchen master Jadrel Rinpoche. The yangsi was discovered and authentically recognized in Leten Tramo Drag, a sacred location in Tibet, by Tulku Thubten Zangpo Rinpoche of Palyul monastery. Thereafter, preparations for his enthronement began. 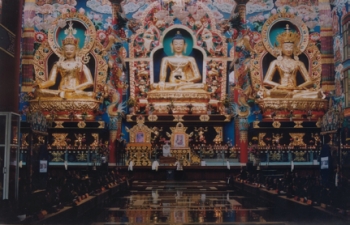 Monks inside the Padmasambhava Buddhist vihara at Namdroling, 2014. The vihara can accommodate several thousand monks during puja. By Tinley Fynn. The Namdroling complex, 2013. The pristine gardens are enjoyed by the monastic community, locals, visitors, and tourists alike. By Tinley Fynn.
As the yangsi, Pema Dorjee, is still very young, the precise details of his future education have not yet been formally decided. When he reaches a suitable age, an exceptional Khenpo (highly educated senior monk) will be selected to educate him on all aspects of the sutra and tantra, with extensive instruction on the practices of the Nyingma school.
As the grand enthronement ceremony was under way at Palyul in Tibet, a major celebration was also taking place at Namdroling, Penor Rinpoche’s main monastery in South India. This included several days of puja and tsok offerings for the yangsi Pema Dorjee’s long life, as well as three days of spectacular performances, including traditional Tibetan, modern, and Indian dance. It was at Namdroling and within the monastery’s surrounding community that Rinpoche’s loss in 2009 was perhaps most deeply felt. Whilst this special and historic occasion marked the return of Penor Rinpoche in his homeland, it has also been a time to commemorate the life work of the yangsi’s predecessor, who inspired the minds of everyone in his presence.
His Holiness Penor Rinpoche dedicated his life to keeping the Palyul traditions and teachings alive and accessible to Tibetans in exile as well as to students around the world. Perhaps less widely known, however, is the unfathomable compassion and loyalty with which he rebuilt the fractured and displaced community that followed him to safety in India after fleeing Tibet in 1956.
Over the years subsequent to his departure, hundreds more attempted the long and treacherous journey. In 1961, His Holiness and around 600 followers (including my own family) made the last leg of the journey south to Bylakuppe, in India’s Karnataka State. Arriving with nothing but a few hundred rupees to his name, His Holiness led and labored intensely alongside what survived of his community to realize an astonishing feat. Enduring the extreme hardships and obstacles of poverty and displacement, from the toil of his bare hands Penor Rinpoche built the Thegchog Namdrol Shedrub Dargyeling monastery, known in short as Namdroling.

The scale of Rinpoche’s vision was, however, far beyond what those around him could have guessed from such humble beginnings. Starting with just a handful of monks, the monastery grew steadily over the years. It is now the largest Nyingma monastery in the world, providing for the physical and educational needs of a population of around 5,000 monks and nuns. However much the monastery grew, Rinpoche never lost his personal connection with his followers, and remained a loving father to all who knew him. At my birth, he blessed me with my name; at my great-uncle’s passing, he called on our home and performed puja. In the unflinching light of his teachings and compassionate leadership, a community not only rebuilt itself, but also flourished and thrived.

Perfecting the practice of selflessness, Rinpoche never removed himself from the practical, day-to-day requirements of his monastic and lay followers. Namdroling was purposed not only to cater to the spiritual needs of the community, but also to provide other vital services. The education and health of the settlement were always paramount to His Holiness’s concerns, and he left a lasting legacy in both these areas.
In 1978, Rinpoche established the Ngagyur Nyingma institute (shedra), a center for higher Buddhist studies and research on the grounds of Namdroling monastery. The shedra sees students through up to nine years of undergraduate study and three years of doctoral-level study on the Buddhist sutras and tantras. As well as educating monastics, the institute is open to lay practitioners and researchers of Buddhist Studies. A parallel program is implemented for the nuns of Tsogyal Shedrub Dargyeling Nunnery, sister institute to Namdroling. The nunnery was established by His Holiness to provide equal opportunities for female practitioners in exile to study, practice,

and become fully ordained members of the Nyingma tradition. The program attracts exceptional students from around the world, many from places where opportunities for female monastics do not match those of their male counterparts.

After his passing, His Holiness’s inspiration did not cease to provide. Following his plans and wishes to establish a modern hospital servicing the monastery and surrounding villages, in 2010 the Namdroling Tsepal Tobkyed hospital opened its doors to help diminish health inequalities and disadvantage due to language barriers, economic hardship, and lack of accessible health services in proximity to the settlement’s rural location. The hospital is staffed with Tibetan- and Kannada-speaking doctors and nurses, improving health care for both the local Tibetan and Indian populations.

His Holiness Penor Rinpoche’s impact on the lives of so many, and on the preservation of the Palyul Nyingma tradition, cannot be overstated. With the recent enthronement of his yangsi Pema Dorjee, his followers find renewed hope for the continuation of Rinpoche’s teachings of wisdom, selflessness, and compassion, and for the fulfillment of all his wishes.