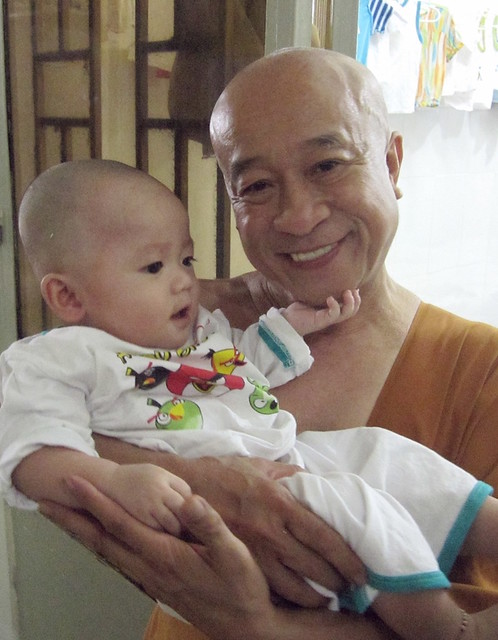 On 30 April 1975, the Vietnam War ended. Over 2 million people were killed and countless more were injured or missing. Today, more than 40 years later, as Vietnam emerges from the aftermath to become a newly developing Asian economy, what is remembered of this turbulent past? A crashed B52 bomber in a suburban lake, the Cu Chi Tunnels, the War Remnants Museums, or the Hoa Lo Prison? Life has moved on. Even 54-year-old Kim Phuc, immortalized in the famous wartime photograph of a naked, crying girl running from a napalm attack and who still bears the scars of the conflict, has found a life of some normality with her family in Canada.*

But for millions of others, the war continues to cast a long, dark shadow. The Vietnamese Red Cross estimates that there are currently 1 million people, including 100,000 children, suffering from cancer, birth defects, skin disorders, auto-immune diseases, liver disorders, psychosocial effects, neurological defects, and gastrointestinal diseases as a result of the 20 million gallons of the chemical defoliant Agent Orange used by the US military to strip Vietnam of the forest cover concealing its enemy.** The terrible legacy of Agent Orange still haunts Vietnam 40 years after the war ended. Image courtesy of the author

Six-year-old Hong is one such victim, an embodiment of the haunting legacy of Agent Orange and of the suffering brought about by man’s inhumanity to man. It is heart-wrenching to watch her cry helplessly as she lies in her crib. I wanted to take her in my arms, to soothe her tears, but I withdrew, afraid that my untrained hands would cause her more pain, that her fragile, brittle skin, which has rarely been exposed to sunlight, might rupture from the pressure of my touch.

Hong suffers from severe hydrocephalus, sometimes known as “water on the brain,” a condition in which the excessive accumulation of cerebrospinal fluid results in an abnormal widening of spaces in the brain, sometimes causing serious brain damage. Despite surgery, Hong’s head has grown to such massive proportions that all she can do is lie on her back and stare into empty space. 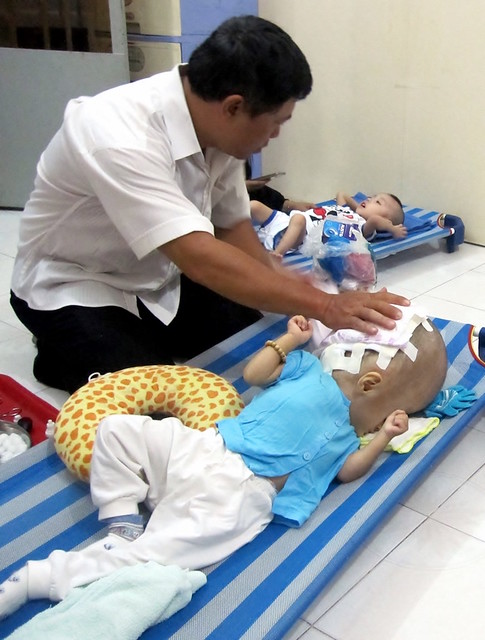 A nurse attends to a child with hydrocephalus. Image courtesy of the author

I stood in silent admiration as a nurse carefully turned her over to gently clean the sore on the back of her head and apply a dressing. What does it take to have to handle such tasks day after day? Surely such a person must possess the qualities of mercy, compassion, and patience, in great quantity.

There are some 200 children at the orphanage at Ky Quang Pagoda II*** in Go Vap, Ho Chi Minh City, and almost half are third-generation victims of Agent Orange. Many are born with birth defects, blind, mute or deaf, mentally or physically handicapped in varying degrees. A significant number have such severe muscular degeneration that they are totally incapacitated or wheelchair-bound. Some are infected with the HIV virus or afflicted with Down’s syndrome. 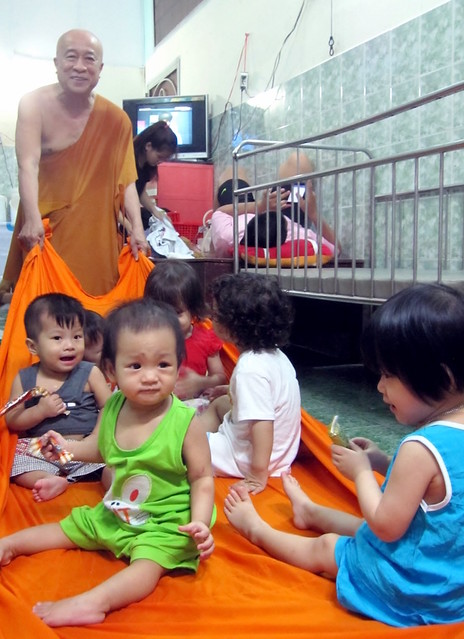 For the children of Ky Quang Pagoda II, Ven. Thien Chieu is the most
important person in their lives. Image courtesy of the author

But despite all of this, there is an air of cheerfulness and vibrancy at Ky Quang Pagoda II, especially when the chief abbot, Venerable Thien Chieu, makes his rounds. The children surround him in excitement, eager to be hugged. Even the faces of those unable to move or speak light up with joy. In spite of their conditions, they can clearly feel his love and compassion.

A friend of mine who works with children with special needs once said to me that some children suffer greatly when compassion is withdrawn, and one person could make a difference to these children—either to support their learning, or to destroy their confidence. For these children, that person is surely Ven. Thien Chieu. Abandoned babies at the pagoda are brought for medical examinations and registered with the govenrment. Image courtesy of the author

As Ven. Thien Chieu plays with the children, I sense the special bond between them. The children call him “thay ca” or “ba” (terms for father in Vietnamese). But he is more than that—he is also their mother, their teacher, their friend, and simply the most important person in their lives.

“Every human being needs love to grow,” he tells me, cradling an infant in his arms. “All children need physical contact, to feel human love. The physical touch and hugs are very important and therapeutic. It helps to bring the children out of sickness, to soothe their crying when they are in pain, or when they cannot sleep.” Some children stay on after the age of 19 because they are unable to take care of themselves. Image courtesy of the author

Ky Quang Pagoda II was built in 1924 as a place of worship, but a single event in 1994 redefined its role. A blind boy carrying his crippled brother strayed into the pagoda’s grounds, hoping to sell a few lottery tickets. Moved by the plight of the boys, Ven. Thien Chieu gave them lunch. Upon listening to their story, he was moved to offer them a home. Soon, a few more came and in no time there were 20 homeless children living at the pagoda. As the news spread throughout the surrounding communities, people began donating rice, food, and other supplies.

“Love comes from love. That is what the Buddha teaches,” Ven. Thien Chieu observes. “We depend on the generosity and kindness of the people. They come and see for themselves the work we do, and they offer their support in many ways.” The main shrine hall at Ky Quang Pagoda II is an eclectic mix of Buddhism, Toaism, and Vietnamese customs. Image courtesy of the author

Because of its reputation, the pagoda has unwittingly become a home for abandoned babies. Every few months, the monks find a baby at the gates, some just a few days old, occasionally with a note from the parents. Hospitals, too, often contact Ven. Thien Chieu to take in abandoned babies.****

More than 60 abandoned children now live at the orphanage, but Ven. Thien Chieu finds it difficult to reject anyone. “No one wants to abandon their children. It is because of difficult life situations that they are forced to do so,” he says. “For example, we have a pair of male twins who were brought here by their mother in 2000. She had lost everything in a serious flood and could not afford to feed the babies, and begged me to take care of them. How could I say no?” He named the boys Son (mountain) and Thuy (water), after the two main characters in a Vietnamese legend about a flood. 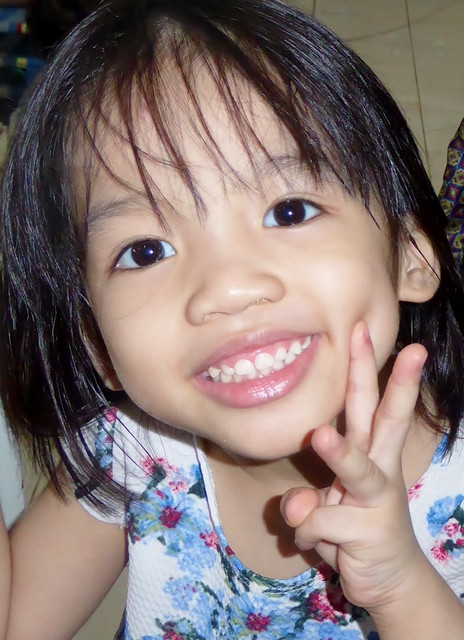 This adorable four-year-old girl is one of 60 abandoned children at Ky
Quang Pagoda II. Image courtesy of the author

Ven. Thien Chieu ensures that those children who are able attend school, at a concession rate granted by the government. Some have made it to college and even university, such as 17-year-old Tran, who is partially blind. Tran, who has spent her whole life at the orphanage, aspires to become a teacher when she graduates so that she can help the other children here.

By the age of 19, the children can decide to leave the home. Some boys choose to remain and become monks. Some of the children get married and have children of their own. Those who are unable to survive on their own can stay and help out. But for many of the severely disabled, Ky Quang Pagoda II is the only world they will ever know. Those who pass on are cremated and buried in a plot in a public cemetery. 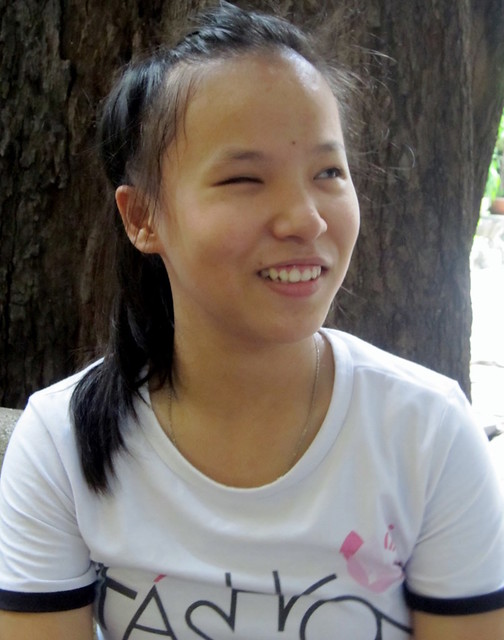 Seventeen-year-old Tran, now in her second year at university, has been at Ky
Quang Pagoda II for as long as she can remember. Image courtesy of the author

With so many children, the staff of 40 caregivers and 16 monks have their hands full and are often unable to provide the constant one-on-one attention the children need. Fortunately, there are many local volunteers who also give their time, especially on weekends. Groups of volunteers, young and old, come to help with basic chores such as sweeping, cleaning and cooking, physical therapy, or just to play with the children. There are also a few volunteers who live at the pagoda, some of whom are disabled themselves.

In 2015, the government of Vietnam conferred on Ven. Thien Chieu the Labour Order (awarded to individuals or collectives for outstanding achievements in labor, creativity, or national construction) and a merit certificate for his dedicated service. But for this humble monk, such recognition is of little importance. 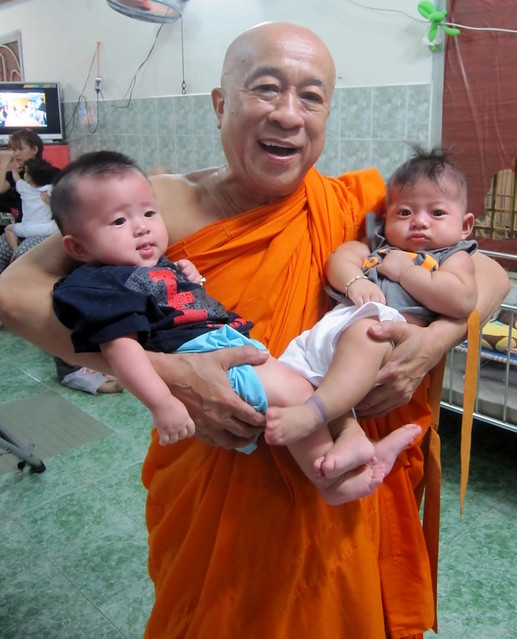 Ven. Thien Chieu on his rounds. Image courtesy of the author

“Nothing is greater than the joy of being with the children and watching them grow,” says Ven. Thien Chieu with a broad smile. “The greatest reward is when I see the handicapped children able to stand on their own and walk again, or a blind child able to see, or to speak and call me ba.”

“Everyone has a purpose in life. When a monk sweeps the pagoda’s yards to clear away the fallen leaves, he drives away bad thoughts. Helping these disadvantaged children is a way to clear the mind and the soul, as well as the evil that exists in our society. If we go on agonizing over who is to be blamed for the war or for the suffering of these children, it only creates more negativity, more hatred. The only way we can heal is through true love, compassion, joy, and equanimity. If we nurture these qualities, we can face all difficult situations with fortitude, and bring a deep meaning to our lives.”