Rev. Youngju Kim by the main shrine at the temple in Somerville, MA. Photo by Ven. Priyarakkhit Sraman

In a charming three-story house on Hill Street in Somerville, Massachusetts, just outside of Boston, Reverend Youngju Kim is showing a man how to balance his budget. The man found the Won Buddhist temple over the internet and came for help with his personal problems, which included financial debts, addictions, and issues with time management. Reverend Kim counsels him and lays out a plan for him to balance his spiritual and material life.

The primary goals of Won Buddhism, a modernized form of Buddhism originating in Korea in the last century, are edification, education, and charity. The Won Buddhist temple in Somerville is one of 600 Won Buddhist temples and 200 related institutions throughout the world. This temple, which is under the administration of Reverend Kim, was incorporated as a nonprofit organization in March 2002. But Reverend Kim has not always resided in Somerville. Rather, she grew up in a village outside of Seoul in South Korea.

A highly revered Won Buddhist minister, Reverend Kim has lived in America since 1996. After ordaining in Korea in 1993, she served as a junior minister in the Won Buddhist temple in Seoul in 1994 and 1995, residing in Miami and Los Angeles before establishing the Won Buddhism temple in Somerville in 2002. 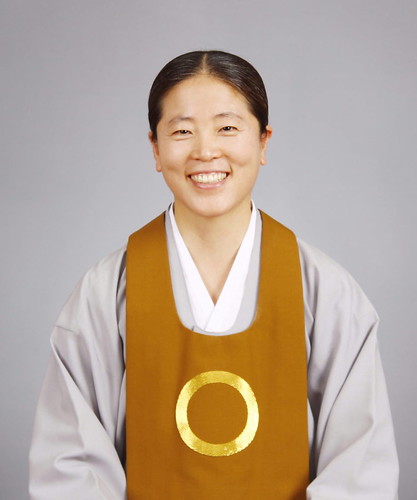 Reverend Kim was raised in a Won Buddhist family, her great-grandfather having established and sponsored a Won Buddhist temple in her hometown as a lay member. She recalls that she was the most religious and spiritually oriented person in her family, and from childhood, adored being at the temple. “At the time when I was in grade school there were no Dharma services for children, but I would attend the adult Dharma services with my mom although I don’t know what I understood at that time,” she says with a full laugh. “Then, when I became a middle-school student, the temple established a weekly youth group Dharma service, and I began to attend every week. One day I heard a Dharma talk by the minister, and was hooked by the enlightenment stories of Shakyamuni Buddha and Sot’aesan, the founder of Won Buddhism. I became very curious about enlightenment.”

What was it about the enlightenment stories that most intrigued her at that young age? “I was especially fascinated when the minister said that when one is enlightened he or she understands everything in the universe,” she explains. Reverend Kim likens this experience to the germination of a seed within her consciousness, after which her interest in other activities quickly ceased. “I stopped playing with my friends as I lost the appetite,” she says.

Reverend Kim’s curiosity about knowledge, insight, and the power of understanding led her to take a bus by herself into the city in order to “find something that I could read that could provide me with more knowledge.” She came home with two books containing the stories of two Buddhist monks who lived 1,500 years ago. Reading them, Reverend Kim grew more serious about Buddhist practice and the enlightenment experience. “I . . . began to concentrate on wanting enlightenment, and since that time very often I would reflect on the stories of the monks,” she shares. The main shrine at the Won temple in Somerville, MA. Photo by Ven. Priyarakkhit Sraman

Yet Reverend Kim did not entertain thoughts of ordination herself. Instead, she attended high school in Seoul and eventually entered a teacher-training college, going on to become a teacher of German in Seoul for three years.

Raised in a traditional Korean household, Reverend Kim was the youngest of six siblings. Her elder brother was very conservative. “I was always nervous in front of him, and even though he never scolded me, I had so much fear and respect for him that I found myself conforming to his and my family’s expectations,” she tells me. “My family wanted me to go to college, become a teacher and get married, so I just followed it. I didn’t have a strong voice at that time.”

However, during her senior year at the teacher-training college, her older brother died from an asthma attack. Reverend Kim recalls his death as the saddest time of her life: “I felt so sorry about his death, since he influenced me so much from my childhood.” And yet, at the same time, she remembers feeling a kind of freedom. 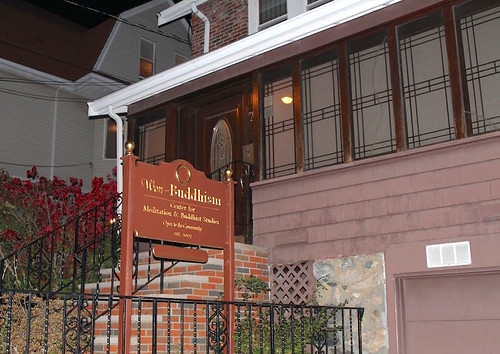 This sense of liberty spurred her to later begin training as a minister in the Won Buddhist college in Seoul, graduating with top marks in her final exams. She intended to remain in Seoul and serve as a Won Buddhist minister in a traditional role, teaching, preparing Dharma services, and visiting members of the temple, and did serve in that capacity as a junior minister for two years. However, during the second year one of her mentors, whom she greatly respected, suggested she relocate to the United States. Such a monumental life change had never crossed her mind, but her special relationship with her mentor was enough to cause her to embark on it: “Even though I had never thought about it, I respected and trusted him so much that I wanted to follow his suggestion. So, I told him I would go,” she recalls.

Starting out in California, Reverend Kim found Los Angeles in winter both strange and difficult. Everything, from the weather to the flat terrain, to the new language and culture, seemed a hardship. At first she wanted to pack up and go home, but after a period of adjustment and introspection, she opted to stay. She grew determined to take her struggles onto the path, choosing to see the challenges she faced as an opportunity to grow in her practice.

She mentions how being in the US gave her the chance to push the boundaries of what she thought her ministry would be like. “Here in the United States, I had to do many things I had never done as a minister in Korea, like mowing the lawn and doing repairs. At first I was in a state of shock!” she acknowledges. Gradually this shifted, and Reverend Kim determined to do whatever was necessary, becoming receptive to a new way of being. “I started to realize it is right for practitioners and ministers to do whatever is of help to others,” she says. To that end, in 2001 the Dharma master at the Won Buddhist temple in New York sent her to Boston to found a temple there. The building on Hill Street was purchased at the end of 2002, with the first Dharma service being held on 27 April 2003. She began with community fairs, meditation classes, and open houses to invite people to discover what the temple had to offer. The temple would host tea ceremonies, Korean cooking classes, and Korean games for families. Others would come to know of it by word of mouth at the nearby universities, as well as from the internet.

Today, the temple hosts weekly services in English and Korean. In addition to traditional Won Buddhist services, Reverend Kim finds herself teaching basic life skills such as nutrition, exercise, and general life management. Gradually, some develop a more rigorous Buddhist practice once their personal lives have become more balanced. She finds this situation peculiar to the American population. Nevertheless, she is willing to help and guide wherever she can—indeed, this has become the core of her practice.