Welcome to another Lily Pad Sutra exploring the many years I combined meditation-practice with location-independence.

Last month’s instalment—Diving (Back) into the Pool of Life—found me experimenting with staying in one place for a year, only to find my metta-morphosis Dharma shifting to the work place as I was “temping” in 101 different roles instead. It also left readers on quite a cliffhanger, with the ground beneath my feet quite literally ready to swallow me up . . .

You’ll be happy to know I managed to jump lily pads once again in time, but that is a story for a future article. This month, I want to share some more about the effects my true “work” (to generate metta for whatever situation I find myself in) has on my day-to-day “jobs.”

The seed for my true “work” was planted many years ago, when I was serving in the kitchen at a Vipassana meditation centre. At the end of the day, once the students had gone to sleep, servers were able to ask the teachers leading the course questions about applying meditation practice to daily life. One fellow server explained that he worked in a McDonald’s restaurant in his “real” life, and commented on the contrast between the teamwork in his workplace and that of the Vipassana kitchen. And how much better food prepared with metta tasted. He lamented that his work colleagues weren’t mediators as well. The teacher smiled kindly and gently answered, “It doesn’t matter whether those around you are meditators or not, what matters is that you are.”

I carried that seed with me into this year of experimenting with role-independence: could I generate metta no matter what role I was in, no matter who I was working with, no matter what was going on around me? The agency I was temping for certainly gave me plenty of practice from serving at intimate weddings, to international sporting events, to academic conferences, to glitzy charity balls. Sometimes the guests were high-profile celebrities, sometimes everyday sports fans, sometimes professional athletes, sometimes nervous family members.

Generating metta came more easily in some placements than others for different reasons.  However, the truest test and contrast was most definitely the professional kitchens. If you’ve heard someone use the expression “now I’m cooking with gas” (to find one’s true pace after many failed attempts), perhaps you’ll understand why I mentally call these experiments “cooking with metta.”

The mood of a professional kitchen is usually determined by the head chef and trickles down from there. Head chefs come in all shapes and sizes, but generally fall into one of two broad categories: they are either cool and calm or hot and fiery. Believe me, some of the kitchens I’ve been sent to make Gordon Ramsay look like the Dalai Lama in comparison! Most of my fellow temporary coworkers will either fight back, turn invisible, or ignore the drama as best they can.

Silently generating metta while I wait for food to be ready to be served has an interesting effect on those around me, generating all sorts of questions from coworkers as we hurry out with the dishes or bring them back to be washed . . . the most frequent being: can you teach me to stay as calm as you when staff or customers are being difficult?

If there’s time, I’ll answer these questions by explaining the basics of mindfulness and how to silently bless those around you. If I sense that that may be too much too soon for someone, I simplify it further: imagine anyone who you’re having difficulty with as being a new born, in need of kindness, care, and patience. It’s impossible to stay triggered by a new born. I once jokingly added: perhaps a difficult customer wasn’t breast fed and is still annoyed? This quip hilariously birthed a running in-joke among the staff of describing certain diners as “needing more milk (of human kindness).”

One of the most memorable evenings was waiting on an astronomy conference dinner held in Liverpool’s Anglican Cathedral. If you’ve never visited this impressive building, it’s the UK’s largest and the world’s seventh-largest Christian cathedral. Seeing it decorated for the evening in celebration of all things astronomical and some 50 banquet tables set for dinner was truly magical. 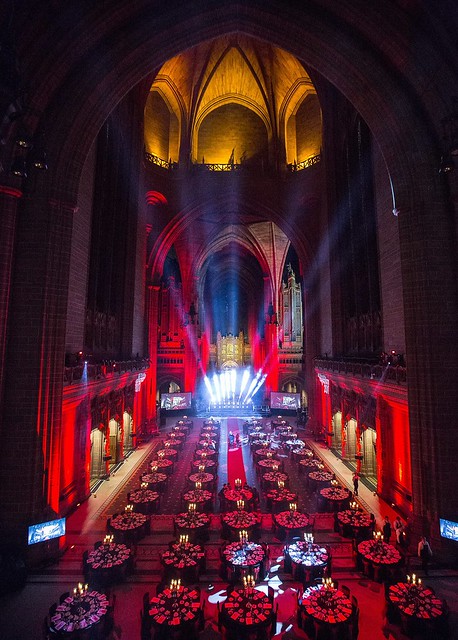 It also made me wonder how much such an evening might please historical scientists at odds with the church (like Gallileo).

For any readers who’ve never served at a large function, there is both a military precision and balletic quality to bringing plates out to guests. Every table is considered a clock face with position one always facing in the same direction. Wait staff teams queue in the kitchen in a strict order to pick up two or three plates (depending on how heavy they are), and are isssued curt individual orders like, “Table 22, positions 4 and 5, 5 is the veggie” before seemingly effortlessly following each other out onto the public area, where a floor manager dressed in black will discreetly indicate what table we’re meant to serve next. With any luck, the food appears to guests like magic dominoes clock-wise from position one. Once plates are served, the same team follows itself back to the kitchen in the same strict order to start all over again.

During the after-dinner speeches of that particular evening, the organiser kindly thanked the wait staff for demonstrating quantum entanglement in action—referring to the physics theory of individual particles that remain connected so that actions performed on one affect the other, or what Albert Einstein famously described as “spooky action at a distance.”  What a compliment, and what an aha moment for my own metta experiments! Perhaps all types of work could truly be an opportunity to let metta perform its magic dominoes trick on the whole? Not unlike psychology’s entrainment or biology’s contagion or quantum physic’s butterfly effect?

Not soon after, I was helping at a wedding celebration in Liverpool’s iconic Liver Building overlooking the port that spawned both the Ammerican slave trade and the Industrial Revolution. I noticed that the kitchen porter was especially friendly whenever I delivered dirty plates or cutlery for washing. His smile and good humour doing the lowest and dirtiest job in the kitchen had a noticeable domino-effect in the kitchen’s fiery atmosphere. I waited until we were alone to ask him what his secret was. He grinned and asked whether I could keep a secret? He was in fact the head chef of a well-known restaurant in town, but every once in a while he liked to pick up kitchen porter shifts elsewhere to remember what it’s like for staff at the bottom of the ladder. I recently listened to Michael Sandler’s interview with Dr. Dean Radin, senior scientist at the Institute of Noetic Sciences, who researches the science behind clairvoyance, telekinesis, and telepathy. During their conversation on his latest book, Real Magic, Dr. Radin credits his personal 40-year meditation practice as the inspiration for his scientific breakthroughs. At the end Michael Sandler jokingly asked him where he would most like to test the effects of positive intention on the world at large. 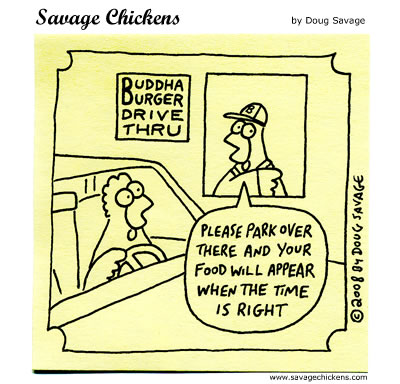 Gladden the Mind: Four Ways to Practice with Negative Thinking
The Impossibility of Outsourcing Happiness
Concerning Right Action and Right Livelihood
Buddhistdoor View: Cultivating Non-Attachment in the Midst of Pressured Living
When All Else Fails, Exhale