It’s been nearly a year since I started this Lily Pad Sutra column, exploring the cultivation of both meditation practice and location-independence—a combination I like to call lily padding. The articles to date synthesize all I’ve learned since I took my first liberating “jump” in 2010. However, some of my favorite spiritual advice regards the paradox that sometimes what sets us free at one stage of our soul’s journey can evolve into its prison in the next.

Six years into my house-sitting adventures, lily padding was starting to feel like a prison both in body and soul. When I first began following the Dharma’s lead, it often felt like playing a very clumsy version of inner hot-hot cold-cold. With time and practice, sensing the next steps became more fluid and intuitive, although I admit that at times I still craved a road map or mentor for what I was attempting.

Imagine my surprise when I unexpectedly found a role model in the opening pages of the latest thriller by one of my favorite fiction writers, Nora Roberts! Lila, the heroine of The Collector, is an aspiring writer and house sitter who inadvertently witnesses a murder in the next building, much like James Stewart in Hitchcock’s classic film noir Rear Window. I won’t give the plot away, but as she solves the mystery, Lila also decides to give up house sitting after six years when she falls in love.

I sat with my growing unease, wondering whether perhaps—after years of cultivating equanimity with constant change—the time had come to cultivate equanimity with no change at all? When no next step felt obvious, a compromise surfaced (minus the murder and romance): to continue to both sit in meditation and house sit, but only where I’d “sat” before.

And so began the most interesting phase of my lily padding adventures: two years of returning to my favorite four house sits as needed and volunteering at the Vipassana meditation center where my meditation practice began.

What follows is an exploration of coming full circle with both types of sits or, to borrow the Zen term for a circle drawn to express a moment when the mind is free to let the body create, the enso of lily padding.

House sitting between four familiar households simplified the logistics of lily padding, but still had its subtle changes. For example, returning to tend the same gardens in different seasons or discover that the guest room had been renovated in between my sits. I even helped redecorate one myself, down to choosing the carpeting and helping the homeowners paint the walls! The best part of this enso circling phase was spending more time with pets I’d grown to love and the neighbors I wanted to get to know better.

When, one day, the front door handle of a house I was looking after actually broke off in my hand, locking me out of the house until a locksmith could come to my rescue, I laughed until I cried at the Dharma’s not so subtle cold-cold clue that maybe what had once liberated me had truly turned into a prison. And I was clearly locked out.

Interestingly, I had one more house sit booked after losing my “handle” on things. I decided to honour it nonetheless and discovered on arrival, just before last Christmas, that the homeowners were thinking of moving on themselves come the New Year because of health problems.

When they returned from their holiday, I ended up staying and helping pare their household down to half its size in anticipation of their downsizing move. While we sifted through what to keep, what to discard, and what to donate, the perfect property for their medical needs materialised. And, in the most elegant of lily padding enso circular brush strokes, I even wrote a character reference for their new landlord. 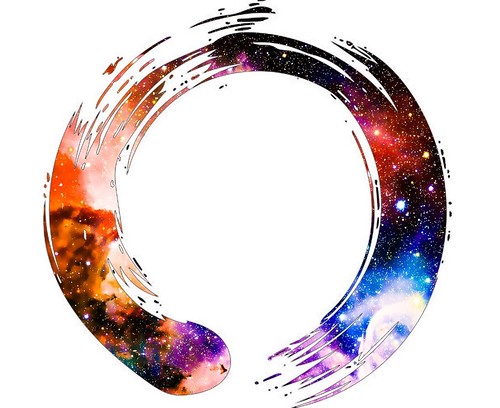 A few months before, I had a comparable lily padding enso experience with my Vipassana meditation practice. Over the years, I would return to give service at the center I had first learned Vipassana whenever I could. This usually involved helping in the kitchen or cleaning for the students while 10-day silent courses were underway.

One day, I was elbow-deep in washing up soap suds when the upcoming course’s teacher approached me to ask whether I would consider managing the women’s side (as the center segregates genders). She had brilliantly managed nearly all of my own courses when I was a student, so it felt both doubly honouring and doubly intimidating to be asked specifically by her.

I agreed, and the very next day I found myself looking after the logistics and welfare of the latest 60 silent female students. Luckily, I had a partner manager and between us our biggest challenge was to herd stragglers like sheep dogs. We took turns to go looking for any students not yet on their cushions in the meditation hall when the gong rang. Sometimes it was due to an innocent misunderstanding of the timetable. Sometimes it was due to oversleeping or illness. But most often it was due to fear.

The official remit for a course manager was to maintain noble silence and guide a student back to the hall or the teacher (depending on what was most practical in the moment). This made perfect sense in theory but, in practice, compassion often made me break the rules when I discovered someone sobbing in a shower cubicle, or packing their bags in a panic in their sleeping quarters, or hiding in the forest of the walking area. At first I found it baffling that a course that had always brought me such freedom could seem a prison to others. As more and more beginners “bolted,” I began to question the blurred lines between self-discipline and self-compassion, between self-observation and self-torture.

How exactly did I break the course manager rules? Paradoxically, by letting the Dharma take the lead in each situation with a joke where some levity might help, or a sneaky biscuit where some old-fashioned bribery might soothe. Hot water bottles were a close second to sugar for instant comfort! Some students needed encouragement sticking out the course, others needed permission to leave the course early without judgment. One scared soul, who was beating herself up for wanting to leave, simply needed to hear that she was the 10th student that day I was having this conversation with. “Really?!” “Yes, really. Please stop comparing your insides to everyone’s outsides,” I gently reminded her.

After an exhausting 10 days of being available to students 24/7, I felt colder and colder about how meditation was being taught and often misunderstood. I’d just witnessed a group of 60 strangers silently torture themselves while hearing the Dalai Lama’s wonderful mantra—“kindness is my religion”—on repeat in my own head and heart.

I nearly walked away from Vipassana after that experience, but decided to give it another chance by sitting the Satipatthana course (the next level up from the course I had just managed). It is the meditation equivalent of graduating to the adult table. Two days of observing the amount of self-torture among even very experienced meditators with the Dalai Lama’s mantra still on repeat, I spontaneously shifted gears from observing my own body’s sensations to simply generating metta for everyone present . . .

Wow-wow to the inner hot-hot I got from the Dharma!

On the final day of the course where students break noble silence, also known as metta day, I lost count of how many fellow students I’d never spoken to or even made eye contact with called me the little ray of sunshine. Apparently, whenever they sat next to me in the hall or crossed my path outside of it, their mood instantly brightened and their spirits instantly lifted!

I smiled, kept quiet about my decision to stop meditating on the second day, silently thanked the Dharma for “converting” me to the religion of kindness and thereby springing me from my latest inner prison.