Amaya and Sophia learning about instruments. Photo by Henrique Gaspar

At Khadro Ling, many of the sangha children meet each other again during the holidays, when their families attended the annual Essence of Siddhi Drubchen. A drubchen, Tibetan for “Great Accomplishment,” is an elaborate eight-day Vajrayana ceremony involving meditation, prayer, and ritual.

Most of the sangha babies are now toddlers or even older, and during the drubchen, they all seemed to be more engaged in the ceremonies. Some of the teenagers have even started to learn how to play ritual instruments and joined the long sessions of meditation and chanting. The smaller children also participate in various activities during the ceremonies; performing ritual dances using masks and  joining part of the 24-hour unbroken mantra recitation, which is one of the elements that characterize a drubchen.

A few days after the ceremonies had concluded, I asked my daughter Amaya what she thought I should write in this post. I was curious whether there was something special from the ceremonies that she thought I should share? After thinking for a little while, she answered: "friendship.” I was expecting her to mention the ritual dances, because she loves watching those. I was curious and asked her why friendship was important for Buddhist practice. She explained that her friends had helped her learn the mantras they recited during the ceremonies and the dance steps by practicing together. They also had a lot of fun rehearsing a song that they performed as an offering on the last day. Amaya commented that she would have been too shy to make the offering alone, but as a group she had more courage.

The children played together for hours in the front of the temple, and worked on coloring books at the back of the shrine room during prayers. In general, children are constantly learning when they play together. They learn how to share and to resolve conflicts, and how to support one another. For the sangha children, supporting each other seemed to be the theme of this recent gathering.

When we participate in a group retreat, our fellow retreatants often help by providing checks and balances, and we inspire each other by engaging more deeply and joyfully in the practice. This drubchen, it was lovely to see the sangha children working together in such a positive way. There seemed to be less conflicts and they all were eager to share what they could do in the context of the drubchen. 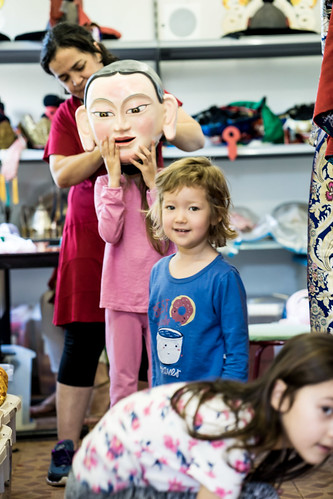 Seeing the sangha children helping one another reminded me of the benefits of having a community of practitioners. My own Dharma friends and sangha have helped me so many times with their good examples of kindness, discipline, and often wisdom. It was encouraging to witness the growth from previous events, where the children would struggle to get through the routine and when, at times, I wondered if the children were benefiting or just providing an opportunity for the adults to practice patience, to this year’s drubchen, where the  children inspired each other as little practitioners with their own positive qualities.

I remember Chagdud Rinpoche saying that if an ordinary piece of wood remains in a sandalwood forest long enough, it too will soon carry the scent of sandalwood. This, I feel, was happening in the recent drubchen ceremonies as my little daughters, who can be very naughty,  started to engage more in the ceremonies and were not just running in and out of the shrine room. All the children seemed to be receiving the blessings of having spent repeated school breaks with their parents at such events.

On the last day of the drubchen, the ceremonies always begin very early in the morning in order to complete all the necessary rituals, receive blessings, and recite the concluding prayers. This year, the small children were all determined to participate, asking each other who would wake up at dawn to be receive the blessings. To my surprise even my youngest, Leela, who is still one of the littler ones, woke up with her sister and tried very hard to stay awake during the ceremonies, but eventually fell asleep in my arms in the shrine room. Amaya and the other older girls also took naps after receiving the blessings. On this last morning the concluding ritual includes a butter lamp prayer offering. As Amaya drifted back to sleep in the shrine room after receiving the main blessings, she said "Mom wake me up for the butter lamp party, okay.”

The following day, the school holidays finished and all the Dharma kids had to go back to their school routines. Amaya and Leela both looked a little sleepy on the first day back at school, but Amaya eagerly told her teacher, “I woke before dawn, yesterday, for the end of drubchen.” I blushed and explained that we had an event at the temple and the teacher smiled. That morning Amaya had said she wished drubchen could be all year long, butonce we arrived at school she happily joined her classmates.