A visionary mural. Ferocious protective deities with dancing animal-headed khandum appear in their dimension in the sky and above the ground. Bumthang, Bhutan, 2006. Photo by Gerard Houghton. From Core of Culture.

It was 2006. We were in Bhutan. Rising at 5:30am, filmmaker Karma Tshering collected us to meet 40-year-old Lam Yeshe—a disciple of the 67th Je Khenpo, known as Nizer Tulku, a reincarnation of Woogpa Lingpa, who created a set of visionary dances centuries ago. We did not know then that Lam Yeshe would be preparing Mike Borre, an American man with Pakinson’s disease, to meet the Nizer Tulku and participate in a dramatic healing encounter, described in the first instalment of this short series. Lam Yeshe’s mantra-based healing techniques, taught by the Nizer Tulku, were performed for seven days after a two-man Aryurvedic massage, and before Mike’s meeting with the Nizer Tulku. The Aryurvedic treatment is recounted in part two of this series..

Lam Yeshe is a healer who is known particularly for healing Parkinson’s disease. As he explained it, he surrendered himself to become a manifestation of Chana Dorje. He studied many tantric techniques, including an isolated retreat in a cave during which he recited the Chana Dorje mantra more than 400,000 times. He now lives in Simtokha. Chana Dorje, known also in Sanskrit as Vajrapani, is one of the three primary bodhisattvas along with Avalokitesvara and Manjushri. Vajrapani is wrathful and protective, a god of power and energy, rain and thunder, and snakes. Chana Dorje appears in the after-death visions of the luminous bardo, along with all the dancing animal-headed dakinis. Chana Dorje is elemental force harnessed. 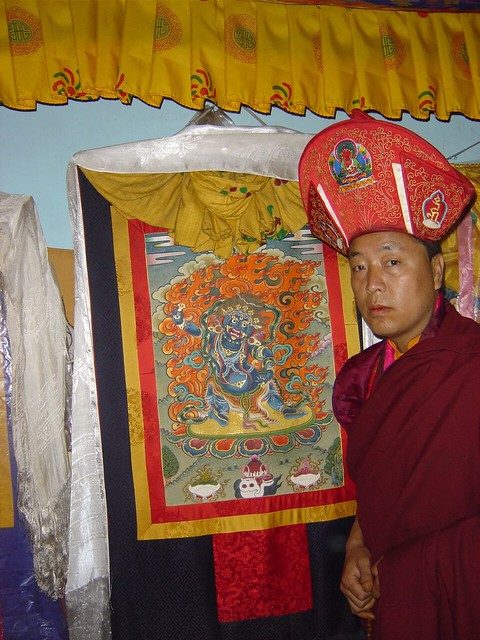 Lam Yeshe stands next to a thangka of Chana Dorje. Photo by Gerard
Houghton. From Core of Culture

The technique of reciting a particular mantra is a well known practice, performed for various reasons, using various mantra associated with various deities and their consequent attributes. The powerful omze, chant master of the Cham dance performances, at Tamzhing Monastery in Bhutan, rural seat of treasure revealer Pema Lingpa, attained his basso profundo chanting voice during his cave isolation and  400,000 mantra repetitions, and further as the mantra was a tantric meditation technique using the strongest protector Palden Lhamo, the monk’s spirituality took on indestructible qualities. He was utterly transformed, even as his moonbeam smile and mischievous ways remained unchanged. He became the voice of Palden Lhamo. The spiritual and vocal power were unmistakable. 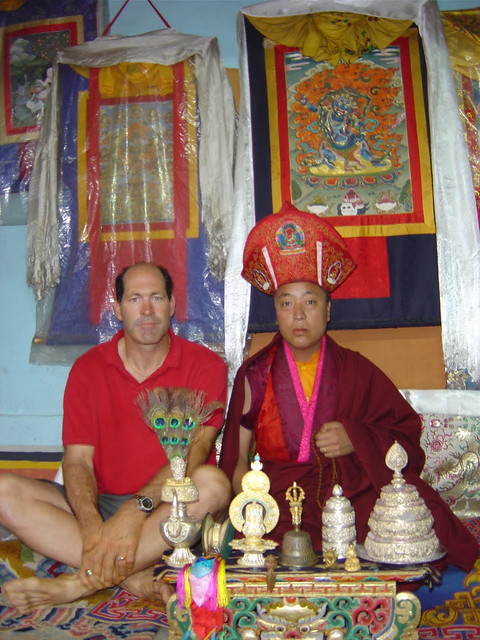 Lam Yeshe with Mike Borre, 2006. Photo by Gerard Houghton. From Core of
Culture

When we arrived at Lam Yeshe’s, there were approximately 20 people who had been waiting since 5am. From babies to very old men and women. Upon our arrival we were invited to be the next supplicants. Removing our shoes we stepped into a small three-meter-by-three-meter room lined with thangka scrolls of Chana Dorje and others. Lam Yeshe was seated on a small stool. We sat on the floor around a large metal basin.

Karma Tshering explained about Mike’s conditions, pacemaker, deep-brain implant, and drug regimen: that he had had Parkinson’s disease for 13 years. Mike Borre was Lam Yeshe’s first foreign patient. The room was full of a beautiful energy between Mike and Lam Yeshe; calm, embracing focus.

As he leaned over the basin, camphor- and herb-treated water was poured over Mike’s head while Lam Yeshe chanted a mantra. All instructions to Mike, regarding his body position, and to his two ritual attendants, were given by gesture. He remained wholly absorbed as a conduit in his mantra-induced spiritual condition, Chana Dorje healing even as he conducted mundane actions like pouring treated water and throwing rice.

Rolling up his pant legs and removing his socks, Mike was purified by more holy water, poured from a bronze vessel into the basin. A rubber stamp of the Chana Dorje mantra was used with an ink pad to place about 50 prints of the mantra on Mike’s body.

Small pellets, actually small rolled up verses on paper also bearing the Chana Dorje mantra, were swallowed, thus placing the mantra within and upon his body, as well as sonically through his body by the empowered chanting of Lam Yeshe. 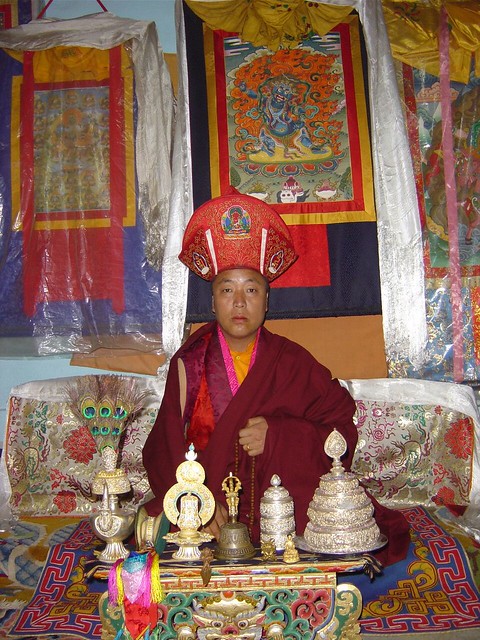 Lam Yeshe in his healing workshop with ritual implements, 2006. Photo by
Gerard Houghton. From Core of Culture

A hollow two-foot bamboo reed was used to blow mantra-purified holy breath on Mike. As a further cleansing, a peacock feather duster cap for the vessel was used to dust the bad karma from Mike, and finally a vajra was held at center points on Mike’s body—not unlike how it is done to a ritual effigy in tantric Cham dance, performing the destruction of evil.

He then proceeded to give Mike Tibetan medicine in pellet form, more rolled-up mantra, and advised him against consuming pork, eggs, fish, onions, garlic, alcohol, and tobacco. We moved closer to his throne and sat observing several more families. Here began the day’s dance karma. The father of one adult son who had been cured was there. His name was Neten Dorje. Hmmm . . . we knew this name. Then we remembered:

Neten Dorje, the formerly imprisoned entertainer to the third King’s personal court. Celebrated as the most refined dancer and a superb singer and musician, Neten Dorje was a living encyclopedia of Bhutanese court traditions. Neten Dorje is the only Bhutanese knowing the dance tradition of Sey Dratshang in Bumthang. His other son is Daachung of Karchu Dratshang in Bumthang. He was imprisoned for 18 years on the basis of political consequences, and we had been seeking to meet him for many months. He was gracious and informative and keen to assist our research with his precious embodiment of culture.

Mike then did something unexpected. He brought out a gold medal on a ribbon, something he had won in a swimming championship, and gave it to Lam Yeshe. “There is a small lhakhang in a village near Ura. Inside there is a powerful mural of Chana Dorje. Perhaps you can visit it?” the Lam said in return. The small lhakhang and dance courtyard in a village near Ura, as described by Neten Dorje, where magnificent murals of Chana Dorje and dancing deities appeared, 2006. Photo by Gerard Houghton. From Core of Culture

“Yes,” agreed Neten Dorje the entertainer. “It is a mural of the bardo after-death visions, and Chana Dorje appears with the dancing animal-headed khandum, some fantastic images of the dancing khandum you will find.” After the last patients were seen, a select group of supplicants—about eight—were encircled around Lam Yeshe’s throne. He chanted and blessed this group, including us, tossed blessed grains and water upon us, blew his breath, and feather dusted us, and finally we ate and drank a bit of the holy water poured into our hands. This was the end of the ritual.

He asked that Mike visit him at least seven days in a row, observing that it is easier to cure a disease when it is new. Mike’s was more than 10 years old. He told us several stories of healing Parkinson’s and stroke patients. He repeated that Mike was his first foreign patient and expressed confidence in the powers of Chana Dorje in healing and the spread of his power in the West through Mike.