The black silhouette of a shaven-headed priest, hands clasped in prayer as he looks out toward Mount Fuji’s snowy summit; a line of orange-clad monks bearing alms bowls cross the grass at a temple near Bangkok; a portrait of His Holiness the Dalai Lama meditating at his residence in Dharamsala, India. These iconic portraits of contemporary Buddhism are all the work of Don Farber, an American photographer who has been traveling throughout Asia and the United States photographing Buddhist life and practice for the last 40 years. A practicing Buddhist himself and a Fulbright scholar, Farber has received considerable acclaim over the years for his beautiful portrayals of the diversity of Buddhist practice. But it is his own spiritual devotion and belief in the importance of spreading a message of peace through his work that have made his depictions of the many faces of Buddhist spirituality so powerful and enduring. Born and raised in Los Angeles, Farber took his first photography lessons at age 16 and soon developed a passion for the art form, inspired in part by an exhibition he saw at the Los Angeles County Museum of Art of the portrait photography of Dorothea Lange, whose work expressed great compassion for her subjects. In 1969, he traveled to the Manchester College of Art and Design in England to study the fundamentals of photography before returning to California to photograph mothers and children for an antiwar group that opposed US military involvement in Vietnam. At a young age, his photography was already deeply infused with a message of compassion and peace, and a desire to spread that message. Several years later, in 1977, Farber visited the Vietnamese Buddhist Temple in Los Angeles, and was so moved by what he witnessed there that he decided to document the temple in a book. He also become a disciple of the late Zen master and scholar Dr. Thich Thien-An, and began what would become a life-long commitment to Buddhism and the practice of ahimsa, or non-violence. Using his camera as his tool, he embarked a personal quest to capture visions of Buddhist life and share them with others as a way to generate peace in the world. 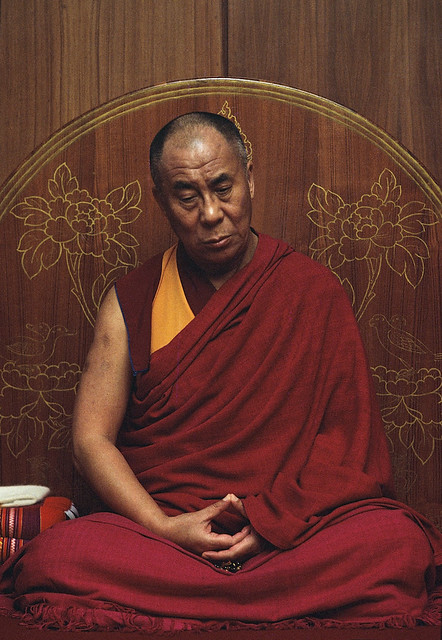 His Holiness the Dalai Lama in meditation at his residence in
Dharamsala, India. Copyright Don Farber, 1997

Farber’s journey has taken him to many diverse Buddhist communities throughout the world. In Tibetan Buddhist communities in India, Nepal, and California, he has worked on many occasions with His Holiness the Dalai Lama and photographed him extensively over four decades. One of his portraits was used for the cover of His Holiness’ book The Art of Happiness: A Handbook for Living (1998) and they collaborated on Living Wisdom (2006), a box set comprising a study guidebook by His Holiness, a music CD, and a DVD and photo prints of Farber’s photography. In the 1990s, Farber spent a year in Japan documenting life in Buddhist communities, including the Shingon school of Koyasan in Wakayama Prefecture and Nichiren temple life on Mount Minobu in Yamanashi Prefecture. His work has also taken him to Indonesia, Taiwan, Thailand, and Vietnam, and to many Buddhist communities in the United States. Many of the photographic highlights of these journeys are published in his beautiful book, Visions of Buddhist Life (UC Press, 2002), a work about which fellow Buddhist practitioner and friend, the late Leonard Cohen wrote simply, “Devoted eye. Sweet enterprise. Thank you.” The book contains many of his most remarkable images of daily Buddhist life, including exquisitely composed images of monks at Wat Ba Ban That, a forest monastery in Thailand, performing such work as sweeping the pathways with long bamboo brooms and polishing the temple floors with coconut husks. His images also depict a variety of worship practices, from prayer, meditation, and the performance of sacred music and dance, to the utterly humble act of prostration, as performed by Tibetan monks at the sacred site of Bodh Gaya, where the Buddha is believed to have attained enlightenment. One of the most touching images in this volume is the image of a young Tibetan monk and his brother, arms around each other, staring into emptiness of the morning mist. Though we do not see the faces of the two boys, Farber’s compassionate lens has caught forever the tender but powerful love connecting them as they face the challenges of the world together. 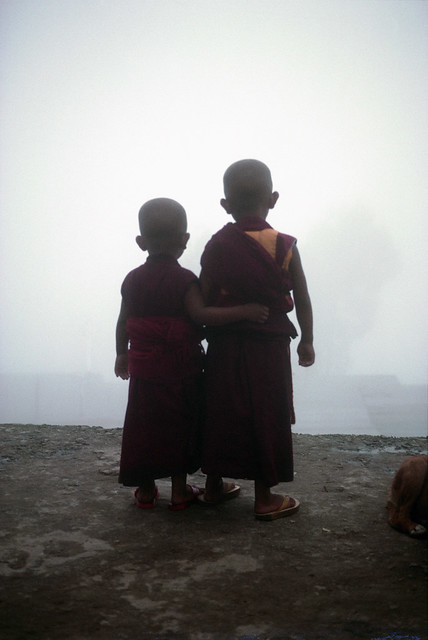 Through such images, Farber himself is able to connect not only with the subjects of his photographs, but also with artists from other ages who have created Buddhist imagery. “I believe I share a kinship with the artists who painted and sculpted Buddhist art over the centuries,” he explains. “Their works have given me great inspiration.” Just as the images of Buddhist deities have helped practitioners over the centuries to understand the Buddha’s teachings, or Dharma, Farber believes that his photography can play a similar role today. “Finding benefit personally from meditation and the study of Buddhist teachings,” he reveals, “I feel the peace and compassion these practices and teachings generate is critical for the survival of the natural world. Photography has an important role to play in not only conveying the essence of the Dharma, but also in showing that Buddhism is something applied in daily life, moment to moment.” 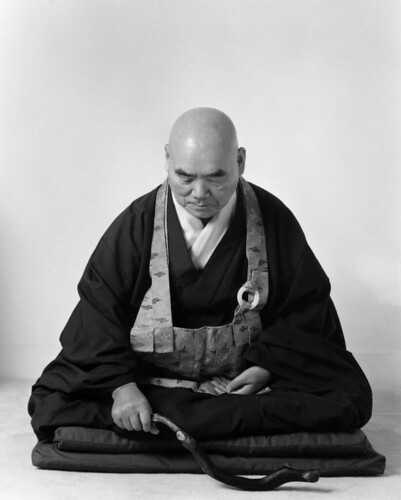 Although Farber is continuing his quest to photograph Buddhist life in all of Asia’s Buddhist cultures, he has also recently been turning to the medium of documentary film as a means to convey important Buddhist teachings and practices. He is currently finishing a film chronicling the last years of Japanese Zen Master Joshu Sasaki Roshi, who pioneered Japanese Rinzai Zen Buddhism in the US in 1962. Roshi founded the Mount Baldy Zen Center near Los Angeles and attracted many followers, most famously the late Leonard Cohen, and lived a long life, dying in 2014 at the age of 107. Like his photographs, Farber hopes that this film will also serve to document contemporary Buddhist life, in particular that of a Buddhist teacher who was critical to the spread of Buddhism in the West. As with his photographs, Farber is handling his subject with sensitivity and compassion, allowing the imagery to deliver messages of spirituality, love, and peace that cannot be conveyed by words alone.

Throckmorton Fine Art is presenting a special exhibition, Visions of Buddhist Life, of photographic images by Don Farber at its New York gallery from 5 March–18 April, 2020.