I think the impact of the Buddha-Dharma on my art can be best described in the words of my root teacher, Chögyam Trungpa Rinpoche:

“There is such a thing as unconditional expression that does not come from self or other. It manifests out of nowhere like mushrooms in a meadow, like hailstorms, like thunderstorms . . .” (Chögyam Trungpa 1994, 20).

This statement echoes the words, written some 1,200 years before, of the early Tang dynasty Chinese calligrapher Sun Guoting (648–703) in his Treatise on Calligraphy, in which he describes the brush strokes of great masters:

“I have seen the wonder of dew glistening from a dangling needle, a shower of rock hailing down in a raging thunder, a flock of geese gliding, frantic beasts stampeding in terror, a Phoenix dancing, a startled snake slithering away . . . Some brush strokes are ominous as gathering clouds, others light as a cicada’s wing. When the brush moves forward, a spring bubbles forth; when it stops, the mountains are in repose. Its delicate trace is like a new moon rising . . . Its bright residue, like a galaxy of stars across the sky . . . Calligraphy is as varied as nature itself and seemingly beyond the powers of man when the hand is moved by the heart’s desire . . .” (Harrist and Fong 1999, 35). I have been creating art all my life. It has always served as a powerful source of joy and inspiration for me. However, when I started meditating in 1975, I could no longer paint in the same way; meditation began to open a part of myself I had no language for. Shortly afterward, I discovered the artistic discipline of Chinese and Japanese calligraphy. For centuries, calligraphy has not only been considered an aesthetic practice, but is also deeply revered as a spiritual and contemplative practice and as the highest art form of China, Japan, and Korea. The powerful images in black and white spoke to me deeply and gave me a vehicle to experience the “unconditional expression” which my teacher had spoken of. Calligraphy offered a provocative way to join my meditative perception with artistic discipline as well as to explore joining the bamboo brush with my lifetime of work as a painter.

Originating from an ancient pictographic language, Chinese characters still have the immediacy of the old pictures embedded within them. These hidden pictures can often suggest multiple meanings. For example, I found it fascinating when I first noticed that the character for “patience” was made up of a picture of a sword over a heart. Could it be urging us to slow down and cut our discursive thought? Or is the sword a proclamation of the strength of our heart when we are patient? Thus, I found that when I drew a Chinese character, I was not just “writing” a foreign language but bringing visual symbols and their meanings to life—a combination of image and poetry. It is probably due to this combination that I am able to write and enjoy Chinese without having mastered the language. 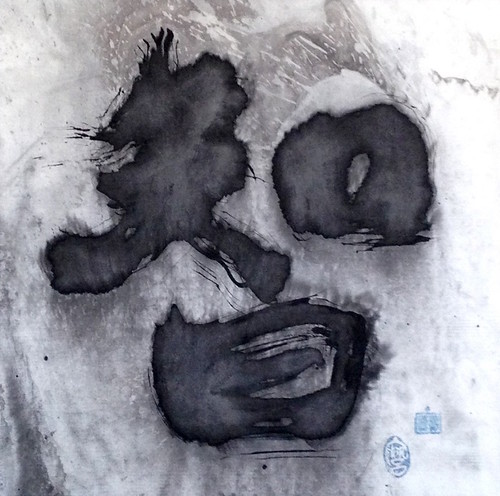 The characters are traditionally written with “The Three Treasures”: the bamboo brush, ink, and paper. The process of drawing the strokes that make up a character does not allow any possibility of change or correction once the strokes have hit the page. This is reminiscent of the expression “first thought, best thought,” describing a practice that can arrest discursive mind and bring us abruptly into the present moment. The inherent discipline of the practice gives us no choice but to tell the truth, for each stroke is mirroring our state of mind on the spot. The contemporary Japanese calligraphy master Shiryu Morita (1912–99) described this when he said, “The brush is not merely just a tool but is blessed as a field from which we gain freedom and become our true selves.”

In calligraphy practice, we are working directly with our personal qi, or life force, and our interaction with the quality of space we inhabit. How we relate to our state of mind and space is of prime importance in giving our artwork an authentic living expression. A balance of precision, relaxation, and spontaneity with a brave and nonjudgmental heart is needed to allow the qi to flow like “a flock of geese gliding” or “a startled snake slithering away,” as described at the beginning of this article. 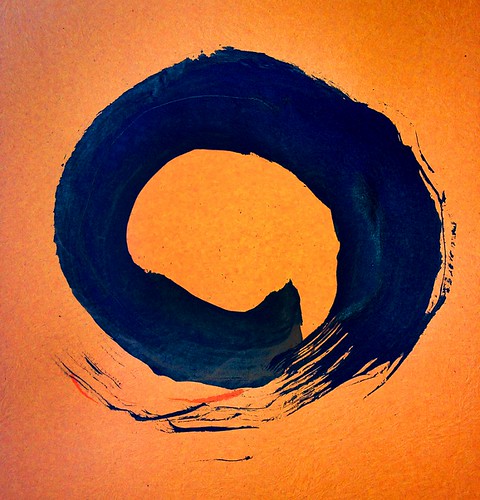 The Chan, or Zen, tradition of China and Japan honored this view so much that monks were often instructed to practice one stroke (J. ichi) exclusively for up to seven years until their lines showed a power and authenticity reflecting a true synchronization of body, mind, and spirit. Their masters demanded that they bring every ounce of their attention to their practice so that their strokes became living energy. Today, this “living energy” is measured in modern museums with an electron microscope used to distinguish forgeries from the genuine work of great masters. It examines the quality of the qi energy in the ink particles; those of the originals have a sharper, more energized, and vibrant shape, and those of the fakes can appear weak, shriveled, or muddled (see Terayama and Omori 1983, 12–22).

Some of my favorite Buddhist calligraphers, true masters of qi, were “the mad monks” Huaisu and Zhang Xu. They both lived in 8th-century China and wrote wildly and spontaneously, with such mastery that they would draw crowds as they (often inebriated!) wrote their “mad cursive” script on everything from walls to banana leaves. In his poem, Dou Ji (732–89) describes Huaisu’s wall writing:

“Before the limewashed wall . . . /his emotion rises, the energies surge,/He suddenly cries out two or three times/and lo! The wall is covered with thousands of characters” (Billeter 1990, 182). 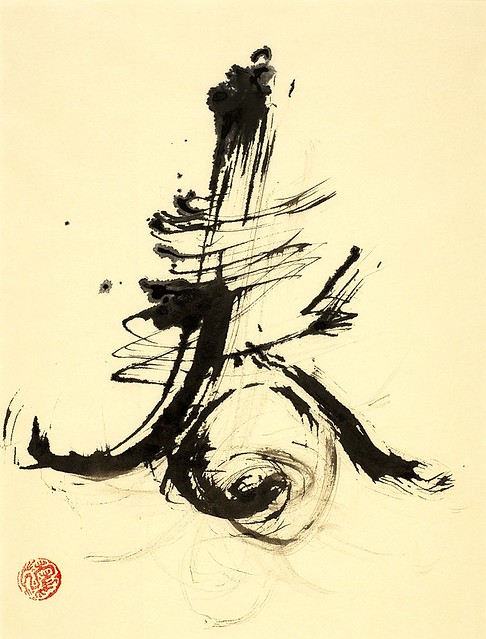 Over the years, l have been blessed to practice calligraphy with many masters. I studied first with Yoneko Mizushima, followed by the Soto Zen priest Kobun Chino Otogawa Roshi, the Imperial Bow-maker of Japan Shibata Sensai, Kaz Tanahashi, and Harrison Tu, and recently, with Tu Chung Kao in Taiwan. I was honored to show my work in two-person exhibits with both Kobun Chino and Shibata Sensai. I also worked with my Buddhist teacher, Chögyam Trungpa, in various Dharma art installations, all with the theme “Enlightened Society,” which walked one through a whole world of Tibetan, Chinese, and Japanese culture including Ikebana, calligraphy, Asian furniture arranged in rooms, and large scrolls written by Rinpoche in Tibetan scripts as well as Japanese Kanji that left one breathless in the face of its elegance. He often invited Shibata Sensei and Kobun Chino Otogawa Roshi to create collaborative pieces where he would write in Tibetan and they, in Japanese. I worked on an ongoing basis with Kobun Chino Roshi, who, at first, to my dismay, refused to teach me but instead roped me into teaching with him, for which I felt tremendously underqualified. I hold all three masters in my heart as living examples of ones who manifested brilliance and wisdom in their art as well as in their presence. 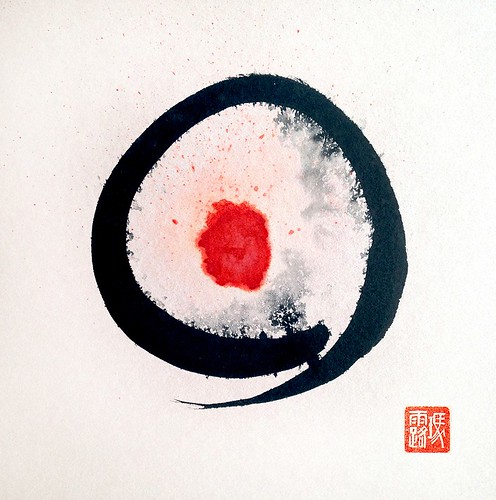 In conclusion, the impact of the Dharma on my path as an artist has been monumental. From my first encounter with the Dharma, I was blessed with the inspiration of many realized teachers and challenged with the opportunity to join the richness they shared with my love of art and healing. This has created a magnificent “thunderstorm” that continuously shatters any concept of myself as “the artist” and replaces it with art as a way of life; as Chögyam Trungpa said, “It is your life, your whole being” (Chögyam Trungpa 1994, 22).

Terayama, Katsujo, and Omori Sogen. 1983. Translated by John Stevens. Zen and the Art of Calligraphy: The Essence of Sho. Law Book Co. of Australasia.

Marlow’s calligraphy has traveled since 2003 to international exhibitions in China, Japan, Korea, Thailand, Europe, and New York City. She received an outstanding award for calligraphy in Shanghai. She is a featured artist in the documentary Chinese Calligraphy in 5000 Years, which aired on CCTV throughout China, Hong Kong, and Singapore.

She recently published a book of her poems and paintings, The Way Through, available on her website.