Small-town Nebraska is about as far from India as a person can get, but for Buddhist scholar and acharya Judith Simmer-Brown, who grew up there, that faraway place always had a particular draw. Located in the Midwest of the United States, Nebraska has wide swaths of flat farmland sliced by paths for pickup trucks, wind plucking through the fields of corn.

“As a child, I had tremendous religious and spiritual curiosity,” recalls Simmer-Brown, the daughter of a Methodist minister. “I asked a lot of people, I read biographies . . . I started a methodical prayer practice. I feel like I had some kind of past-life affinity for meditation.”

That curiosity has carried Simmer-Brown through a lifetime of religious study—leading her to India, where she was first exposed to meditation, to an early devotion to Zen, to a doctorate in Buddhism, and eventually, to a position as an acharya, or senior Dharma teacher, in the Shambhala lineage of Chögyam Trungpa Rinpoche and to a teaching role at Naropa University in Colorado. Curious and questioning, her spiritual intellect has driven her to embody a unique position bridging the divide between the practice of Dharma and the analytical study of religion.

As an acharya, she represents the first generation of women empowered into the Shambhala lineage in the West. As Distinguished Professor of Contemplative and Religious Studies at Naropa (founded by Chögyam Trungpa in 1974), she is a leader in Buddhist scholarship and a thoughtful advocate for the academic study of Buddhism—a role that has traditionally been filled by men. Her study of the dakini, a symbol of wisdom and emptiness usually represented in female form, has modernized scholarship on that topic. By showing how the dakini is essential to Tibetan Buddhism and exploring its nuances, she finds empowerment for female practitioners as well as providing a wider perspective on this oft-appropriated symbol of feminism.

Before becoming a respected Buddhist teacher, Simmer-Brown lived a double life. In the early 1970s, she began studying Zen with Shunryu Suzuki; at the time, she was also teaching Religion at Western Washington University. Her Zen teachers discouraged study; her PhD program shunned religious observance as subjective and non-academic. “So I had a complete split between my practice life and study life,” she says. “That was a real challenge for me. I felt in my gut that I wanted to unify those two sides of my life.”

Simmer-Brown found that unity at Naropa, where she became a student of Chögyam Trungpa, the charismatic and controversial Tibetan teacher. “It was an environment where practice and study went together very naturally,” Simmer-Brown recalls. Encouraged by her new teacher, she was later invited to join the faculty and began teaching at Naropa in 1978. She has remained there ever since. 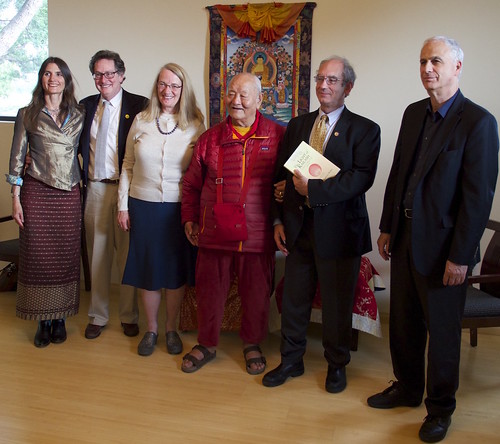 With Chögyal Namkhai Norbu Rinpoche and others at Naropa University. From
melong.com

The coexistence of these two dimensions to Simmer-Brown’s life—a lived Buddhist practice and a rigorous academic career—makes her unique as a teacher. “Her integration of contemplative and academic modes of inquiry produces insights that are unpredictable and fresh,” wrote Dr. Susan Burggraf, professor of contemplative psychology at Naropa, in an email. “She embodies feminine wisdom and fierce academic passion with a deep and engaged commitment.” Her commitment to inquiry makes her a demanding teacher: “She expects her students to show up,” says T. J. DeZauche, an adjunct professor at Naropa who is also Simmer-Brown’s administrative assistant. “She can be sharp in a classroom, but those expectations come from a deep confidence that her students are capable.”

In addition to her classes at Naropa, Simmer-Brown instructs as a Dharma teacher in the Shambhala community and in 2000 was empowered as an acharya—a unique teaching authorization for meditation teachers who are also expert in Buddhist scholarship. She feels that inheriting teachings from another culture is a great responsibility, and while she critiques the Western tendency to romanticize Tibet, she also believes that a thoughtful and thorough analysis of cultural traditions is essential. “What aspects of Tibetan culture are appropriate for us to utilize and honor, and what parts are not so useful? One of the things I appreciate about Tibetan culture is the emphasis on family, household, tribe, and community. The blind spot is that tribalism leads to exclusivism and prejudice,” she tells me. “One of the biggest challenges for us is how to keep a sense of depth and integrity, of connecting and respecting Tibetan culture, while not being culturally biased toward people who are different from us.”

Scholarship is one method of maintaining “depth and integrity,” and she worries that American Buddhism is becoming “brittle” as it popularizes. Many Western teachers focus on accessibility, but at the price of context: mining Buddhism for its psychology, stripping it of complex terminologies that can cause confusion, and using mindfulness as a secular concept. As a result, Western practitioners are often disconnected from Buddhism’s cultural and religious trappings. While she respects and even teaches mindfulness as a practice, Simmer-Brown worries that in isolation, it can over-simplify the religion: “I’m much more of a part of American Buddhism that feels that loyalty to, devotion to, the core teachings is so important. That’s why study is so important, and why it’s so important to keep going back over the traditions, the texts, the teachings, the cultural decision that Buddhism has made to keep an unbroken lineage.” Simmer-Brown’s call to scholarship is a call to re-inhabit and explore the origins of Buddhism and its connections to rituals, texts, and traditions around the world. Judith Simmer-Brown teaching a class at Naropa University. From cpr.org

It was once unusual for a woman, especially a Western woman, to be given responsibility for a scholarly lineage. “In the 1970s, [the Shambhala community] was a heavily male hierarchy. It was very difficult to be in a senior position of teaching . . . as a woman. I was very uncomfortable with that,” she says. However, this has changed; Simmer-Brown is now a senior teacher, and other female acharyas—most notably Pema Chödrön—have become the primary voices of the Shambhala lineage in the West. Simmer-Brown’s book Dakini’s Warm Breath, published in 2001, explored ideas of gender and femininity in Tibetan Buddhism—and also challenged them.

Simmer-Brown’s research on the dakini principle has been influential, even among scholars outside the strictly Buddhist realm. “As a Comparative Feminist Philosopher, I hold Dr. Simmer-Brown's scholarship on the dakini in high esteem and use it in my own work,” wrote Dr. Erin McCarthy in an email. McCarthy, who heads the Philosophy Department at St. Lawrence University in New York, met Simmer-Brown at Naropa, where she had a year’s fellowship. “[Her] scholarship on dakinis and her scholarship on the developing field of Contemplative Studies, especially Contemplative Education, are invaluable and substantial.”

This kind of doubt—a circling, probing intellect that refuses to be satisfied with easy answers—defines Simmer-Brown. From rural Nebraska to her position as a senior teacher, she has been animated by a combination of doubt and curiosity. These are not just characteristics of a religious scholar, she says; they are fundamental to a rich and rigorous spiritual life. “A life of inquiry has enriched my practice enormously and made me a much more resilient and durable practitioner,” she says. “We all have to develop skillful ways of working with doubt. It doesn’t mean that you take doubt and just squash it, or that you feed it either. Doubt is an indication that intellect is at work.”