It’s clear to most of us these days that compassion is a much-needed quality in the world. But what actually is it? And how can we help it grow and develop around us? In recent decades in North America, a growing number of Buddhists have recognized the need to bring Buddhism “off the cushion” and out into the world. For many, this call has been inspired by the Vietnamese Zen master Thich Nhat Hanh, and for some by the pioneering efforts of the Indian reformer Dr. B. R. Ambedkar. But for others, there is simply a direct realization that their values of compassion and wisdom mean little if they do not translate into action.

This month we interviewed Robertson Work, who has a lifetime of experience dealing with this intersection of compassion and action. Among his many titles and positions are NYU Wagner Graduate School of Public Service adjunct professor of innovative leadership, founder and facilitator of the Collaborative for Compassionate Civilization, and as a facilitator and trainer for the United Nations Department of Economic and Social Affairs, UN-Habitat, and the East-West Center, among others. Additionally, Work is a Fulbright Senior Specialist assisting universities overseas and a Fellow of the NYU Wagner Research Center for Leadership in Action. Last summer he published the book A Compassionate Civilization: The Urgency of Sustainable Development and Mindful Activism—Reflections and Recommendations, now available at major book retailers.

Buddhistdoor Global: Thank you for agreeing to this interview, Robertson. It’s very much appreciated. We’ll begin with your book title. What does it mean to have a compassionate civilization? This sounds like something Buddhists can strive for, but quite often Buddhists think of cultivating compassion just within themselves and not at a societal level. How would you address that? And in terms of the social level, what are we missing?

Robertson Work: Compassion is not pity and goes beyond empathy. Compassion is the intention and action to relieve the suffering of another being or oneself. If you apply compassion to a community or nation or global society, your policies and systems must be designed and implemented to relieve the suffering of all people and other beings within that community, nation, or global society. A civilization of compassion would be based on such intentions and actions within collective cultures and systems, and as well as within individual mindsets and behaviors. The purpose of such a civilization, therefore, would be to relieve suffering, and promote the happiness of all beings on planet Earth.

If Buddhists focus on cultivating compassion just within themselves, they are not being bodhisattvas. A compassionate being who understands the truth of interbeing and impermanence is motivated to liberate other beings from delusion and suffering. Bodhisattvas, as engaged Buddhists, must take part in political, social, economic, cultural, and environmental actions that relieve suffering. This includes engagement at various levels—family, community, city, state, nation, international, and planetary. Of course, this is an impossible mission but we have always known that the vows to relieve all suffering are such. However, we continue to make this vow and take every action that we can within our spheres of influence. 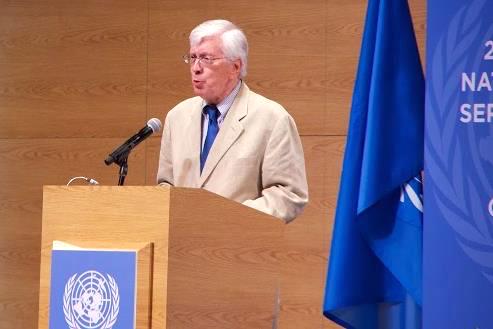 Roberston Work speaking at a UN conference in Bahrain. Photo by UNESDA

BDG: Next, the urgency. I know that many people on the political left, people of color, environmentalists, etc., have been dismayed by the election of Donald Trump and by so much of his rhetoric. Was this behind that sense of urgency? Or are there factors that have been developing for years or decades that you feel are just as urgent?

RW: I began writing this book in 2013 and had been speaking about these topics at UN conferences and my NYU classes since 2011. So the sense of urgency was not because of the 2016 US elections. I have believed for some time that we live in the most critical time in human history, a time to do what is necessary or face the direst of consequences. We are confronted by multiple, interlocking crises including, among others: climate chaos, patriarchy, systemic poverty, plutocracy, bigotry, and perpetual warfare. Climate chaos alone is sufficient to threaten human and nonhuman life on Earth. Climate chaos, along with the other five crises must be addressed urgently or human civilization and indeed life on Earth are in grave danger.

Since November 2016, the sense of urgency and danger has become widespread in the US and throughout the world. People are becoming more involved in political and societal processes and are committing themselves to be part of a “movement of movements” (MOM) that will address these six crises and engage in societal transformation. The environmental movement is committed to environmental sustainability. The women’s movement is all out for gender equality. The new economy movement is fighting for socio-economic justice. The democracy movement is passionate about participatory governance. The human rights movement is pushing for cultural tolerance. And the peace movement is deeply committed to nonviolence. Working together, these six movements, and many others, are our hope for realizing a sustainable and just society. A Compassionate Civilization was published in August 2017 and was offered as a progressive guidebook for these forces of transformation.

BDG: And then the last two parts, which seem related but also very separable: sustainable development and mindful activism.

RW: Working for sustainable development is the sacred charge for those who care. The UN’s 17 sustainable development goals (SDGs) are a major piece of this global effort. The six movements and transformations mentioned earlier are a shorthand for our mindful activism in this quest for a compassionate civilization. This is not merely a utopian task but a necessary one to reinvent human civilization and save life on Earth. It is realized moment by moment, not only in some distant future. When you or I manifest generosity in a world driven by greed, this new world appears. When we offer kindness in a world consumed by hatred, a compassionate civilization is born. When we exhibit trust and courage in a world racked by fear, a new order of being becomes present. Being mindful moment by moment, and manifesting understanding and compassion again and again moves us ever closer to the realization of a civilization of compassion.

BDG: You have quite an extensive résumé. Can you tell us about some of your travels or life experiences that have most impacted you in terms of your work today?

RW: Forty years ago I began meditating and studying Buddhist sources. I found that the challenge of being a bodhisattva was what I had always looked for and had been trying to live. I first tried to change the world from the bottom up, through grassroots community development projects working for 21 years with a nonprofit, the Institute of Cultural Affairs (ICA) in Asia (especially in Malaysia and South Korea) and the Caribbean (Jamaica and Venezuela). I then tried to create a better world from the top down through national and global policy improvements of decentralized governance in countries around the world, working with the United Nations Development Program in New York City for 16 years. Finally, these past 10 years, I have tried to promote sustainable development by changing the minds and hearts of individuals by teaching innovative leadership at New York University (NYU) Wagner Graduate School of Public Service in NYC.

I have learned so very much from the many people around the world with whom I have had the pleasure to work. After working in over 50 countries, now at 73, I am focusing my energies on being an activist in my own country, the USA, and being an author. At the same time, I continue to do some consulting work for the UN as well as some teaching. My daily practice of meditation and mantras and my Buddhist studies and retreats continue to help me live a life of understanding and compassion as a grandfather and a world servant. I am deeply grateful for being a human being on planet Earth. BDG: What do you hope will come of your new book? Changed individuals? Local/community groups? National shifts in discourse and priorities?

RW: My hope for A Compassionate Civilization is that it may serve many people in the US and around the world at this critical moment of history. I hope that it can provide a vision of a possible future that is sustainable and just, inspiration to undertake societal transformation in one or all six areas, strengthening the movement of movements, practical methods for being a mindful activist as an innovative leader and global-local citizen, and finally to provide practices of care for self and others while engaging in catalyzing a compassionate civilization moment by moment. That’s a lot to ask of one book, but those are my sincere hopes. And in a couple of months there will be a Nepali-language edition of the book translated and prepared by a Nepali nonprofit, ICA Nepal. They are giving a copy to each parliamentarian and to other officials in their work to create a more compassionate Nepal.

BDG: Are there any final thoughts or points that you’d like to address?

RW: I would like to thank you for inviting me to participate in this interview and hope that this will stimulate further discussion and action related to being an engaged Buddhist as a bodhisattva in this make-or-break year and decade. I can be contacted at mrw2@nyu.edu, and via my blog, “A Compassionate Civilization.”