Amaya in Tibetan dress waiting to enter the temple at Khadro Ling. Photo by Pedro Rocha

At the entrance to the temple here at Khadro Ling there is an image of the Wheel of Life, (Skt. bhavacakra), clutched by a gruesome-looking monster (symbolizing impermanence). In the center of the wheel are three animals symbolizing the three poisons that come from self-grasping: desire or attachment, represented by a bird, anger or aversion, in the form of a snake, and ignorance as a pig. In the spokes of the wheel are depicted the six realms of existence, which represent all the possible projections or karmic experiences that can arise from these ego-born poisons, the realms through which sentient beings wander.

Recently my daughter Amaya stopped in front of the image. She had passed by it almost every day since she was born but recently she stopped and really looked at the image, taking in all the details with her eyes. Amaya asked her older friend with whom we were walking: ”Why are those beings being boiled and cut up?” She pointed to the image representing a hellish experience. I was surprised when her friend responded, “They are there because they were bad and are being punished.“ I knew immediately that this explanation would not sit well with Amaya and I also did not agree with the idea of punishment, since it implies that there is someone giving the order to punish. I was about to interrupt and explain more to the children but Amaya’s little sister Leela went dashing off and I missed the opportunity.

The following day I had completely forgotten about the incident but Amaya once again stopped before entering the temple and stared at the image. “Mom, I don’t want to be born there,” she said, pointing again to the image of the lower realms. I explained to Amaya that the images showed the type of feelings and experiences that come from very strong emotions, such as the experience that someone who is very angry creates from their own anger. I noted that those experiences are not punishments but the results of our own actions and that we can learn to change the way we deal with emotions to create different experiences.

Since this exchange, I have been thinking more about how to introduce the topic of karma, or the law of cause and effect, to my children as they grow. I have been reflecting on the endless causes we are constantly creating and the unknown past actions that we carry with us. It inspired me to look more closely at my own actions and study the topic further. I listened to a very elucidating teaching given by Dzongsar Jamyang Khyentse Rinpoche in Sao Paulo some years ago, in which he explained the meaning of the Wheel of Life. I learned that this image was originally commissioned by Shakyamuni Buddha as a support for his teachings.

As parents we want our children to enjoy lasting happiness, which involves teaching them how to create the conditions for happiness, primarily by engaging in positive actions. I think that we teach our children through our own example but also by making an effort to explain in more detail why certain forms of behavior are not acceptable and others are. Often in the heat of a tantrum or bad mood there is little space for dialogue, but it helps a lot to come back to the topic afterwards and talk about the results of actions in a broader scope. 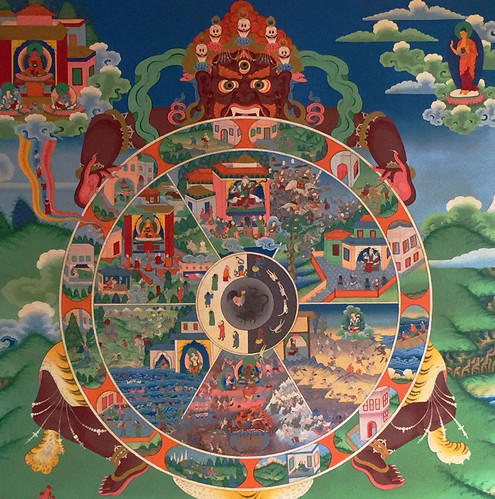 Bhavacakra painting at Khadro Ling. Image courtesy of the author

Setting clear limits has been a challenge for me because I am often too gentle and sometimes distracted. However, when I explain clearly why a certain behavior is inappropriate—for example that being rude is hurtful and makes others feel bad—the explanation seems to have a lasting influence. As a Buddhist parent I think it is of vital importance for children to understand that actions have inevitable results. Before when Amaya would behave unkindly I would ask her, “Would you like to be treated this way?” Now she is older I am starting to explain more about how actions can create experiences and situations that are unpleasant not only for others but also for oneself.

To guide her in this way is also helpful for me. Sometimes I can see how easy it is for my own ego to take over sensible parenting. I want my children to behave well so that I am perceived as a good parent. Sometimes, I want them to express sentiments that agree with my own. When they behave badly in public my ego is shaken, especially when I have lost control of a situation—such as when Leela launched herself into an airplane aisle and tried to bite my shoulder when I brought her back to her seat, or when Amaya refuses to greet a guest and the more I pressure her the more determined she becomes to maintain her silence. It takes a lot of attentiveness to stay focused as a parent and maintaining control is a big issue.

If we acknowledge the presence of karma while raising our children it may be easier to manage when faced with unplanned events. Even before my children were born, I noticed that my husband and I (and also other couples) tried to control the type of birth our children would have. We carefully chose their doctor and, as they grew, which type of daycare and school they would attend. Some families have more options than others, but most of us try to create the best circumstances possible for our children. Being a parent we have to work with so much attachment and a sense of ownership can cloud parenting, for example we may feel defensive or offended when others reprimand our children. I find myself relating to my children as an extension of myself and denying that they have their own trajectories, with causes and conditions beyond what we can provide for them as a family. It is easy to forget that our children come to this life already with a warehouse of past actions and tendencies that are unknown to us and beyond our control.

The study of karma is such a vast topic, however, that reflecting on it even superficially brings me to make a heartfelt aspiration to use the experience of being a family to create positive conditions together and lasting benefits. I hope that through the study and application of Buddhist teachings on cause, condition, and effect, I can encourage my children to take up positive actions and avoid actions that cause harm, and in doing so that they will accumulate virtue. Through this virtue I pray that they will question how things are and develop a longing for wisdom and understanding that leads beyond the experiences of the six realms represented in the Wheel of Life.