Construction of a statue in honor of the bodhisattva Avalokiteshvara is underway in the Russian republic of Buryatia. Once completed, the image will stand 41 meters high and 28 meters wide, making it the largest Buddhist image in the Russian Federation—at present, the largest in the region is an image of Shakyamuni Buddha on Bayan-Khongor Rock near the village of Bayan Gol in Buryatia.*

Avalokiteshvara (Tib: Chenrezig), the bodhisattva who embodies the compassion of all Buddhas, is the patron deity of Tibet and of special importance to the three Buddhist republics in the Russian Federation—Buryatia, Kalmykia, and Tuva—which also follow Vajrayana Buddhism.

Avalokiteshvara is known as Arya Baala (or Arya Bala) in Buryatia, and is worshipped as one of the main Buddhist deities. Construction of the statue began in 2015 in the village of Sanaga in southwestern Zakamensky District. The site for the sculpture was carefully chosen—the first Pandito Khambo Lama Damba Darzha Zaiaev (1710–76), who was also the first leader of Buddhists from Western Siberia and the first Buryat lama to complete a classical Buddhist education in Tibet, dubbed Sanaga “Divaazhin,” or “the Land of Gods.” The inspiration for the monument to Avalokiteshvara came from the 24th Pandito Khambo Lama Damba Badmayevich Ayusheev, the incumbent Buddhist leader for the Russian Federation and the most senior lama in Buryatia.

The project is aimed at creating a new place of worship for Buddhists and a new tourism destination in the republic, along with some of the other emblematic symbols of the region’s Buddhist culture: the imperishable body of the 12th Pandito Hambo Lama Dashi-Dorzho Itigilov (1852–1927), the statue of Zandan Zhuu (Sandalwood Buddha or Sandalwood Lord), and the image of the goddess Yanjima (Sarasvati) that self-manifested on a stone in Barguzinsky District.

To date, the armature of the statue is ready as well as the terrain where Avalokiteshvara will be erected. After the winter season the main part of the construction work will start, under the guidance of the Russian artist Yuri Mandaganov. 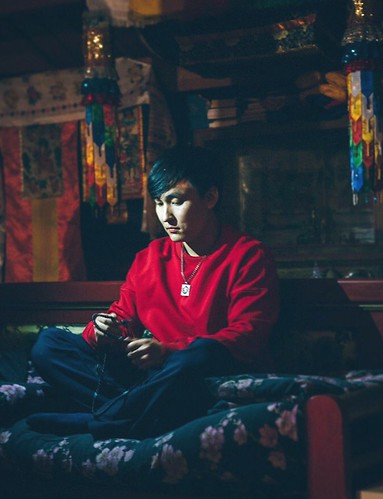 A series of events have been held in Buryatia to ensure funding for the project. On 18 February, the Buryat Opera and Ballet Theater in the capital Ulan-Ude hosted a spectacular concert in support of the initiative. Artists from the Baikal Theater, the Republic of Buratia State Circus, the Zabava Theater, the Buryat Opera and Ballet Theater, and others participated in the fundraising program.

Dashitsyrenov, born in 1991, is one of the brightest stars of the Buryat music scene. It was his idea to create the song Arya Baala in support of the statue project. The lyrics were written by Nina Artugaeva and the music was composed by Ludub Ochirov. 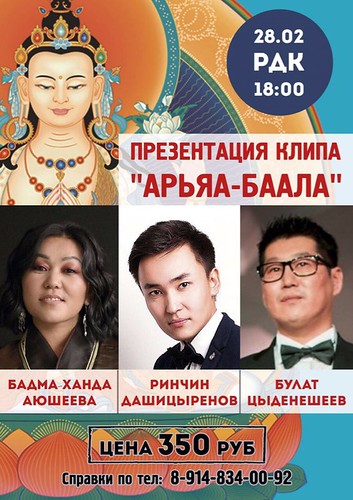 Poster for the concert at the District House of Culture in
Zakamensky District. From vk.com

Arya Baala was released just before the Buryat New Year, known as Sagaalgan (White Month), which this year was celebrated on 5 February. Dashitsyrenov shared on social media that he offered the song as a New Year gift to his fans, also posting a drawing of Avalokiteshvara,

Dashitsyrenov also directed a music video for Arya Baala, which was presented during the fundraising concert on 28 February. The video was shot in the village of Sanaga, with particpation from local residents and lamas from the local temple, Sanaginsky Datsan. The lamas can be seen reading prayers and performing a ceremony of purification, known as dugjuuba in Buryatia, during which all the sins and misfortunes from the past year are burned and extensive prayers are read.

Dashitsyrenov sings Arya Baala in the Buryat language and chants the mantra of Avalokiteshvara, the mantra of the great compassion, om mani peme hung. In the video, he can be seen performing various religious activities, including praying, offering a butter lamp, and dancing around a mystic fire.

The most intriguing participants in the video are little kids praying with folded hands, taking blessed water, turning prayer wheels, and making prostrations at the temple in front of a portrait of His Holiness the Dalai Lama. The video shows also the breathtaking landscape of Zakamensky District and the ancient breed of Mongolian horses that has been found in the region since the time of Genghis Khan.

* The Largest Depiction of the Buddha in Russia (Buddhistdoor Global)

The Largest Depiction of the Buddha in Russia
Russia’s Golden Triangle of Buddhism
Buddhist Holy Sites of the Russian Steppes
The Kalmyk Restoration: Telo Tulku Rinpoche on a Russian Republic’s Buddhist Revival
Kalmykia: Lore and Memory at the Far Side of the Buddhist World