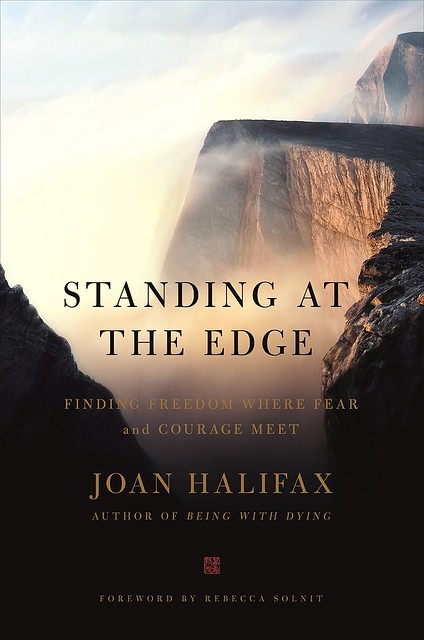 Book cover of Standing at the Edge. From amazon.com

Can you have too much empathy? At what point does moral outrage tip over into bitterness and complaint? How can Buddhists bear witness to suffering without taking on that suffering ourselves? These are questions explored by Roshi Joan Halifax in her new book, Standing at the Edge: Finding Freedom Where Fear and Courage Meet (Flatiron Books 2018).

Known for her work with dying people, Halifax has long embodied a life lived in service to others. She was part of the Civil Rights and anti-war movements in the U.S. and pioneered a training program for clinicians in hospice care. Now the abbot and head teacher of Upaya Institute and Zen Center in Santa Fe, New Mexico, Halifax has become a leader in the Western engaged Buddhist movement. Her new book is, in many ways, about goodness.

“Goodness is inspiring, elevating, and, fortunately, catching,” writes Halifax. “I have always believed that compassion is central to being fully human.”

Those familiar with Halifax’s life and work might imagine that Standing at the Edgeurges its readers toward engaged Buddhism, or that Halifax advocates for the “catching” nature of goodness. And she does — but with a catch. Too much of a good thing leads to burnout, and Halifax has identified five “edge” states, places where she sees the desire to do good tip over into stress, despair, or apathy. Her new book seeks to create resiliency, so that those serving in stressful situations — be they nurses, teachers, or social workers, and so on — can continue their work in the long term.

Halifax explores each edge state in detail: altruism, empathy, respect, integrity, and engagement. After explaining the benefits of each state and how it can tip over into suffering, she gives some practices for finding a way back to a healthy equilibrium. One of the most compelling examples is pathological altruism, a desire to serve, but to do so in a way that plumps your own image as a “good person.” She gives an example from her early life, when she recited a list of recent good deeds for her first teacher, Zen master Seung Sahn. “You are a bad bodhisattva!” he growled back at her. “When our reasons for serving others are self-oriented or ill-informed, when our help creates an unsustainable situation, we go over the edge into pathological altruism,” Halifax explains. This isn’t to say she advocates staying home. Halifax suggests practices such as Not-Knowing, which lets go of judgments about who is suffering and why, and Bearing Witness, which involves remaining consciously in the moment with suffering. Even here, however, she questions herself, wondering if one time that she remained engaged in Bearing Witness with a homeless woman ended up causing more damage in the end. In her chapter on respect, she expresses regret that she never got a chance to connect with a white supremacist in a maximum-security prison, to help him heal from the deep wounds that had festered into his hatred. With that kind of commitment to compassion, Halifax is hardly going to let anyone take an unwarranted break from working for justice. But she also knows that too much work leads to exhaustion, distress, and isolation.

Halifax’s relentless self-questioning, and her probing of familiar Buddhist themes in a new way, makes Standing at the Edgea particularly modern book. With allusions to issues of the 21st century, including prison reform, racism, immigration, and healthcare, Halifax urges the engaged Buddhist to move mindfully through the world of service. This is a book for an era in which simply listening to the news can feel exhausting.

Each state offers opportunity, but also pitfall. By practicing mindfully, practitioners can walk the edge without falling over it. “Healthy empathy can let us see things from a vastly different perspective and can guide and inspire us to resist the normalization of the intolerable,” Halifax writes. But we must avoid falling into distress from listening to others’ suffering, or over-identifying with their feelings. Halifax explains how His Holiness the Dalai Lama often will feel deep empathy toward someone, and then transform it quickly into compassion. This nimbleness of mind, as she calls it, helps experienced meditators to avoid burnout. While empathy is good in limited doses, compassion is limitless, and Halifax spends her last chapter on this most important state.

Halifax says compassion has enemies both far and near. The former are obvious, as in the opposing qualities of discrimination, hatred, and violence. Near enemies, she says are “harder to detect...for example, pity is a near enemy of compassion.”

This isn’t a book of far enemies; Halifax isn’t writing for people who need to be convinced that those who don’t look like them are still worthy of respect. She’s writing for those already committed to issues of justice and compassion, urging those spiritual warriors, to use Pema Chödrön’s term, to find space for self-care and avoid burnout. The near enemies — working ourselves to the ground, letting trauma seep into our bodies and turn our activism to apathy — are the more insidious, and the ones that turn would-be allies against each other.

If we can ride the edge of these states, we have the opportunity for more meaningful action. Whether it be witnessing physical pain or feeding the hungry, Halifax ultimately wants us to be with each other “with greater love.” It’s a way of being that is utterly selfless, in more than one way. She describes a moment where she breaks her hip, and, in excruciating pain, connects with the young medic helping her, whose wife is dying of cancer: “The upwelling of boundless concern and love for another had dissolved my sense of self, and with that, my pain had melted away.”

“There Is Also Joy”—Mindfulness-based Dementia Care
“Welcome Everything, Push Away Nothing:” Being with the Dying at Zen Hospice Project
Engaging with Suffering, Realizing Freedom: An Interview with Ven. Pomnyun Sunim​
Reaching Out to the Incarcerated as a Buddhist Practice: A Tale of Compassion in Arkansas
Venerable Tsunma Lobsang Rinchen Khandro: Acting with Compassion for All Those Suffering from Adversity
A Buddhist Perspective on Crime, Punishment, and Redemption