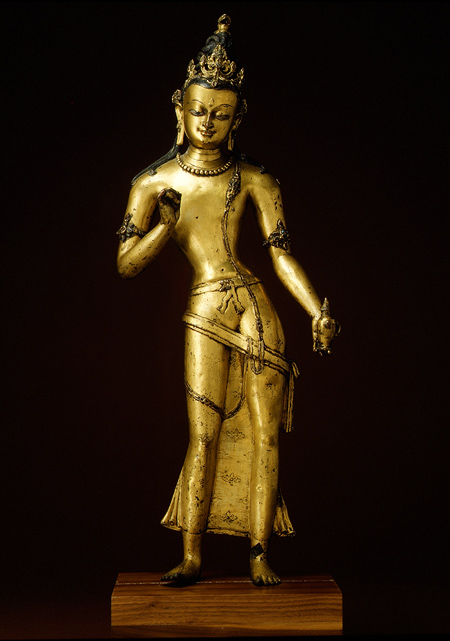 The boddhisattva Maitreya. Nepal, 11th century. The graceful shape is
created using the tribhanga effect, dividing the body into three parts to
produce a gentle S-curve. Image courtesy of the Metropolitan Museum of
Art, New York

Tribhanga, literally three sections, is an aesthetic term in Indian dance that can be traced back to the oldest dance text in the world, the Natya Sastra. Physically, this is expressed as three bends at the knees, waist, and neck, making a gentle, graceful curve of the human form. Referring to Asian sculpture, it means “an equipoise stance bent in three places.” In Western classical sculpture, the quality is termed contrapposto.

India’s foremost exponent of modern art, Maqbool Fida Husain (1915–2011) called his final works—eight mural-sized paintings representing Indian civilization—Tribhanga. His expansion of this term into a metaphoric understanding of form and movement—even of civilization itself—associates conceptually with the dancing human form, with the human form in stone, and with the life of civilization; a swaying imbalance maintaining balance by swaying. The peak of his modern expression is literally the most ancient aspect of Indian culture. Dancers, sculptures, stone monuments, and famous figures fill the grand paintings. So ancient is this story, it is full of explosions and all the explosions fit: unevenly, disjointed, but ultimately connected, ongoing, composed: Tribhanga.

Three Dynasties. 2008–11. 74” x 144”. This triptych shows the Ashokan Mauryan Empire at center, built on martial strength, Buddha was a shining light to come from it, to re-define India. On the left, the Mughal Empire shows India becoming strong by uniting. On the right, the British Empire, with the Hindu goddess of destruction, Kali, approaching Queen Victoria. Image courtesy of the V&A Museum

The Alsdorf curator at the Art Institute of Chicago, Madhuvanti Ghose, has chosen to present these final works by India’s modern master for the first time in the United States. In a bold yet deft act, Ghose has hung the paintings within the sweeping Alsdorf Galleries of Indian, Southeast Asian, Himalayan, and Islamic Art, a hall designed by architect Renzo Piano in which she curated one of the finest collections of Asian sculpture on display anywhere. Together, the painted triptychs and sculptures awaken, creating a resonance among the segmented modern paintings, the painted figures in tribhanga within them, and the inherent tribhanga of the sculptural figures in the hall, Buddhist and Hindu. The paintings stand out like colorful blossoms in a garden of stone. These eight clarion works, each 72 x 144 inches, are a culmination of Husain’s style and talent.

Beyond that, creating art at 95 years old, this old Muslim artist of Yemeni descent embodied the artistic spirit of a democratic identity, with a masterful claim on the narrative of the new nation of India. The birth of the nation and concurrent partition with Pakistan in 1947 set afire the aspiration for internationalism in painting; something to offset a poetic nationalism in art, as well as a rejection of colonial, academic styles. Joining the world as a young nation, ancient India was something new. Husain was a reflection of this. No artist could escape the grasp of the great narrative of Indian civilization; all Indian artists are understood in relation to it, even as history remembers them and as globalism expands context. Husain has produced memorials to his Indian values in the international style of modern art.

But how should we view Husain now, 70 years after the Partition? Certainly as a founding member of the Progressive Artists Group, established in Bombay (now Mumbai) after the Partition in 1947, advocating and embodying aesthetic internationalism in technique, medium, and practice. Husain started out as a graphic designer for Bollywood movie posters in the industry’s earliest days, when film was a new technology, industry, and art. The elements of celebrity culture and graphic advertising that characterize the cauldron of Warhol’s work were similarly the birthplace of Husain’s aesthetic. There is a graphic novel/comic book quality—a far cry from the kitschy cartoons of Roy Lichtenstein—but it nevertheless relies on a Ka-POW! once in a while. Not just the look, but also the kinetic action of a graphic novel is present; an urgency, multiple players moved by multiple motives. Some of the triptychs have a high style evoking a mid-century decorative design.

Indian Dance Forms. 2008–11. The triptych celebrates Indian dances, and the cultural epochs they marked. On the left is kathak dance, a style made great in the Mughal era. Husain’s muse and friend, Bollywood star Madhuri Dixit is dancing. She starred in one of his films. On the right, an insightful film about Kathakali dance is depicted. In the center is the famous dancer Uday Shankar, whose first Indian ballet from the 1930s was made into a film in 1948. Image courtesy of the V&A Museum

These are explosive depictions—defying gravity, dramatic and bursting through their boundaries—that nevertheless provide structure and order, even measure. Action flows: of men, of nations, of time, defining a liminal horizon of activity that encounters planes of pure color; no action save the symbolism of color. There are muted colors, saturated, masterfully set in contrast and radical harmony. Husain paints the lived moments of time. He is proud of these moments for the purview they provide to see history and converse with the past in a new way, befitting a new nation and notion of India. Husain died before completing the intended 32-painting set. What we have is eight: titled, completed, and painted with swiftness and spontaneity between the ages of 93 and 95 years old. Husain’s artistic expression sustains and comprehends the past in the defining of a new national characteristic, more democratic, less taboo, connected in vast and ancient ways, part of the modern world.

There is a sense of liberation in these final paintings. The technique is robust and assured, intelligent and thoughtful, captivating with storytelling, even in the drama of the abstract elements of the pictures. Some have the energy and vitality of graffiti. There is a relentlessly coursing energy throughout the paintings, and finally everything flows and everything fits. These are invigorating statements on Indian civilization; pictures of creation, memorials and meditations. Like a ritual, a re-enactment of an original event. Traditional Indian Festivals. 2008–11. In the center is the watering of the sacred basil. On the right is the lighting of candles and setting them afloat on water under a full moon for the well-being of family. On the left the festival of Holi, when colored powder is thrown on all after evil has been expelled. We see the dance ritual, before the colors are thrown. Image courtesy of the V&A Museum

Together they express the continuity of the inconceivably vast and ancient Indian civilization. The Buddha, almost a footnote, is the dream of King Ashoka in this mighty flow. Who knows if Husain would have painted a Buddhist tribhnaga, as he did with the three primal Hindu deities?

The modern painter M. F. Husain died leaving a powerful narrative of civilization through his prodigious final murals. Now, with their first appreciation in the United States, running through 4 March, Husain impacts the art establishment’s awareness to expand its notions of internationalism, and its conception of the multiple geneses of artistic output. The result is a new story of art, and a deeper understanding of our world. Husain’s love of ancient qualities found final expression in the ancient quality of tribhanga, in which he transformed the artistic meaning to express as well the bending of time as it pulses through an ancient civilization in a graceful three-part curve: past, present, and future; civilization in equipoise. 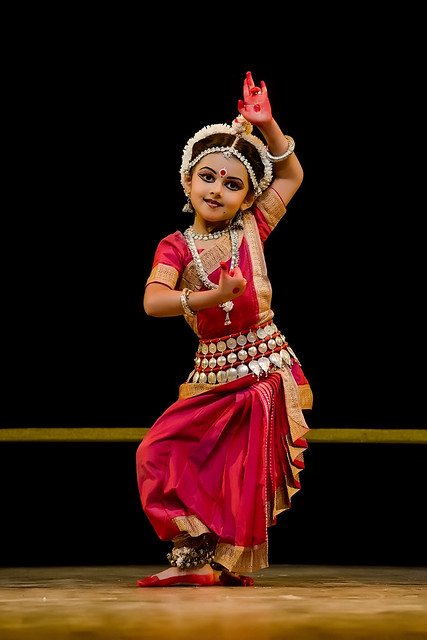