Celtic Buddhism, a little-known and somewhat eccentric permutation of the Buddhist tradition, was founded in Vermont in the United States in the late 1980s. While the concept of a Celtic lineage of Tibetan Buddhism may seem alien at first glance, and might even garner accusations of cultural appropriation from some with a more “orthodox” view of Buddhist traditions, its foundations and principles should be familiar to most practicing Buddhists. We talk to the founder of Celtic Buddhism Venerable Seonaidh Perks and sangha member Ashley Playfair Howes to find out more about this unique Buddhist lineage, its philosophies and practice, and where it fits into the larger world of Buddhism. 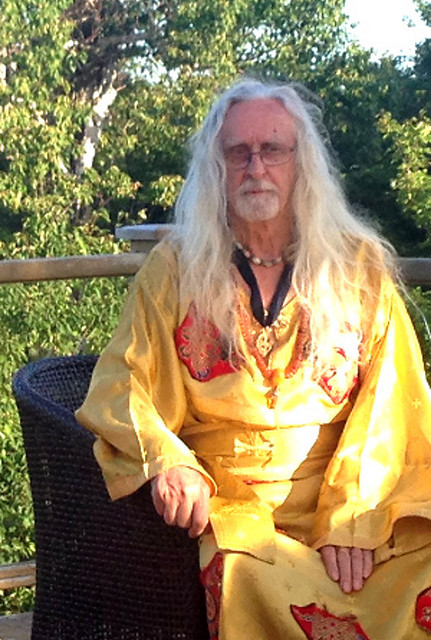 Craig Lewis: The Celtic Buddhist lineage was established in the late 1980s. For readers who may be unfamiliar with the tradition, how did it come about?

Seonaidh Perks: Working with Chögyam Trungpa Rinpoche [1939–87], Dilgo Khyentse Rinpoche [1910­–91], and His Holiness the 16th Karmapa [1924–81] within the Tibetan Buddhist, or Vajrayana, tradition, my path somehow naturally evolved into what might be termed Celtic Buddhism—the Celtic tradition being much like the Bon tradition in Tibet.

CL: Did your personal background play a role in this?

SP: For myself, we could say I was born into a family, a lineage, of women who had a very deep and strong cultural heritage that was also very ancient. From a Western point of view, they would be considered Wiccan [practitioners of Pagan Witchcraft] or spiritualists. The majority of these women were what people would call seers—that is, they were members of a highly psychic lineage that was handed down usually from mother to daughter, but in this case it was from my mother and grandmother to me.

After the deaths of HH the 16th Karmapa and Chögyam Trungpa Rinpoche, I had a compelling desire to repay, in some small way, the tremendous love, wisdom, and compassion that had been shown to me by my root teachers. Since Trungpa Rinpoche had said I should keep things simple, we started by just having small meditation groups in people’s homes. It expanded to holding dinners, socializing, celebrating annual Celtic festivals, bringing in Celtic music and language, changing Tibetan iconography into Celtic, and generally exploring the nature of Celtic culture as well as exploring Buddhism. We were very interested in not producing static, formal forms that might lead to dogma, but rather in relying more on intuition, auspicious coincidence, and vision for our work.

CL: How would you describe the Celtic Buddhist tradition to people with backgrounds in other schools of Buddhism?

SP: From a certain point of view, neither Celtic spirituality nor Buddhism exists, but we have to put together some type of story of how ideas and visions originate so that others might be able to follow them as a path. As far as lineage is concerned, devotion is the primal energy, if you will, that binds together the teachings of the original Buddha down to the present day. If you don’t have strong devotion, then the teachings can’t really be transmitted—and we’re talking about a devotion that is beyond intellectualism or logic.

Celtic Buddhism is a vehicle that one might use on one’s journey toward realization or enlightenment with a constant view that one is committed to not becoming personally enlightened until all other beings have become enlightened. So it’s very much aligned with the nature of Avalokiteshvara [a bodhisattva who embodies the compassion of all Buddhas] and the teachings of Prajnaparamita [the “Perfection of Wisdom,” or Mahayana Buddhist teachings on emptiness]. CL: Does Celtic Buddhism differ markedly from other schools of Vajrayana Buddhism?

Ashley Playfair Howes: First, Celtic Buddhism is not exclusively Vajrayanist or tantric. There will be many Celtic Buddhists who have no interest in hardcore esoteric transformational practice. That said, the underlying view of Vajrayana is that samsara and nirvana are not two, that there is continuity (tantra) pervading all reality (and realities). In that sense, all forms of Celtic Buddhism will be somewhat tantric, albeit not perhaps in the formal sense of certain particular Buddhist tantric schools.

For example, a Celtic view might find it hard to distinguish, either intellectually or experientially, between so-called “fact” and so-called “imagination.” When we look at a tree, or a person, there is never a purely objective process and we always inform what is perceived with our own predilections, both confused and enlightened. Ordinary reality, from the bedrock Celtic/heroic point of view, is vivid, luminous, solid and empty, permanent and impermanent, deeply meaningful and ultimately meaningless. Reality can never be contained by intellect or religious dogma, just as Romans can never actually conquer Celts, any more than patriarchal domination can ultimately overcome feminine lineage wisdom and awareness. Celtic Buddhism is unique in that it requires ongoing imagination and even romantic flair both for the initial connection and for ongoing practice and commitment. Indeed, each individual Celtic Buddhist is responsible for creating and defining the tradition, for there is no central definition. As such, it is a great lineage for both absolute beginners and fully realized mahasiddhas [a master in the tantric tradition].

CL: How are the pagan roots of Celtic culture compatible with Buddhism? What are the commonalities that allow these two cultures to work together?

SP: I think I’ve already talked about the Celtic pagan roots of the women in my family, going back many generations. Those pagan roots are very compatible with the Bon tradition of Tibet. Both are earth-related forms of spirituality in which the energies of the elements—earth, air, fire, water, and ether (energy)—are seen as alive and existing in all forms, which they refer to as deities. One begins to see that rather than living in an alienated and materialistic world that is devoid of life, that indeed life is everywhere in the universe and interdependent, which suggests some sense of personal responsibility for one’s actions.

In more general terms, dependent upon a person’s former karmic situation or attachments, one is born into a situation in which the karma of the mother and father, combined with the energy of a certain location, create the form of a person from conception through to birth and childhood. So these three things—mother, father, and environmental energy—work together. For instance, one could say that children who are born during times of war might suffer irreversible damage. But the Buddhist teachings—Celtic or otherwise—can help heal or transform this energy out of its solid attachments into something more open and joyful. CL: Do you have any advice for Buddhists who are interested in learning more about Celtic Buddhism?

SP: One would have to find a personal teacher with whom one is able to have an intimate relationship. That would be the case within any of the forms of Buddhist lineages. Then one would ask the teacher how they would go about combining one’s so-called Celtic roots within that existing lineage.

Many people seem drawn to the connections between the Celtic aspect and Buddhism, or their idea of it, and have sought to learn more about this connection. It has varied widely, depending on personalities and interests, but it has included some people who have come to live with me and who seek teachings to further their personal path. Some of these people have come from the tradition of Celtic Christianity. Many of these people and others have become lineage holders— teachers who invite students into their homes and share meditation and teachings.

CL: Does Celtic Buddhism have a permanent monastic sangha?

APH: Seonaidh has said that he regards his monastic lineage holders as being similar to Christian monastics of yore, many of whom were also Celtic, who were trained, blessed, and then sent off on their own in a coracle, or small bark vessel, and wherever they landed would flounder or flourish, beholden to serving others but at the same time sometimes engendering extraordinary spiritual progress both within themselves and in those whom they served, and even occasionally fought with.

CL: What are your plans, hopes, and aspirations for Celtic Buddhism? How do you envision the future?

APH: Ideally, there will be a monastic stream. There are a couple of monastic lineage holders and we hope they will establish something over time. But this is up to the gods, of course; the gods of auspicious coincidence whose presence depends upon those whose level of realization spontaneously summons their presence and manifestation in this world we share.

SP: The main concern is avoiding the establishment of religious dogma of any kind, which would poison the members of the Celtic Buddhist sangha. I like to say: “Create a vast question mark,” and from that point of view investigate everything—bringing cheerfulness and joy to all beings.