“Tea + Buddhism” hosted by the The Robert H. N. Ho Family Foundation Centre for Buddhist Studies at the University of Toronto

Starting on 14 October, the community of The Robert H. N. Ho Family Foundation Centre for Buddhist Studies at the University of Toronto will sit down together to enjoy a cup of tea. However, this will be no ordinary tea party, but the first of three public-facing events in the center’s “Tea + Buddhism: A Workshop Series” focusing on the intersection of tea, culture, and Buddhism in three distinct geographies: the Himalayas, China, and Japan.

This series of experiential learning events is just one aspect of the activities of the Centre for Buddhist Studies, which was founded a little over a year ago with a mission to “support a deeper understanding of the diversity of Buddhist traditions around the world.” The center was officially launched in August this year at the 18th International Association of Buddhist Studies (IABS) Congress,* which it hosted, sponsored by The Robert H. N. Ho Family Foundation.

With innovative and inclusive programming, outreach, and support for Buddhism in the university and beyond, one could say that the center’s activities closely align with the vision of its founders of building a framework to create and foster a worldwide community of Buddhist scholars.

Twelve years ago, Mr. Ho and his family decided to establish a foundation dedicated to positive change through the promotion of education and the arts. The foundation’s chief executive, former Canadian diplomat Ted Lipman, explained: “He wanted to focus the foundation on two areas that he is particularly passionate about: one is Buddhism and the other is Chinese arts and culture.”

“His vision for Buddhism is a very broad field,” Mr. Lipman continued. “It wasn’t to proselytize the Buddhist religion so much as to encourage the discussion of contemporary issues within the framework of Buddhist ideas, and generally he referred to this as Buddhist philosophy.”

Mr. Lipman observed that a major aspect of this undertaking is to establish an international network of Buddhist scholarship through universities to “offer a way to encourage people to think about Buddhism as one way of approaching the world.” 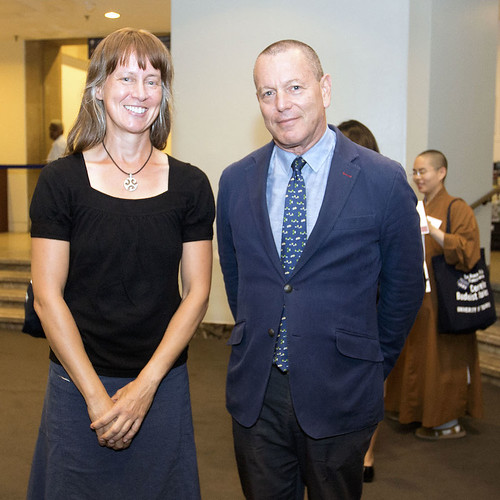 Establishing the Centre for Buddhist Studies at the University of Toronto was a natural step toward realizing this vision. Housed within the university’s Department for the Study of Religion, the center is directed by Dr. Frances Garrett, a specialist in Tibetan Buddhism. In addition to supporting Buddhist Studies students, Dr. Garrett shared that the one of the center’s achievements has been bringing together people who are teaching and studying in cognate fields from Asian studies and history, to anthropology and indigenous studies, and beyond. “Without a center we are dispersed across the university. It’s a huge university, maybe 70,000 students, so it’s really valuable to bring this all together,” she noted. “It also gives us an organizational structure with which to interact with the public, so that is very helpful.”

One doctoral student who feels she has been particularly enriched by the center’s presence is Annie Heckman. She noted that having access to senior scholars who visit the center for master classes and lectures—not just from University of Toronto, but also from the nearby McMaster University and elsewhere—provides the ideal conditions for the cultivation of “more advanced conversations” that expand the “range of orientations to Buddhist practice.”

Also deepening Annie’s scholarship was a study trip to Thailand, where she was able to immerse herself in traditional weaving practices through a program with the International Institute for Asian Studies. The experience aligns with part of Dr. Garrett’s pedagogy of “learning with the body.” This fall, Dr. Garrett is teaching a class that explores how historical, cultural, and spatial contexts shape practices of walking called “On Foot: Cultural Histories of Walking.” One can easily see the influences of such richly immersive practices embodied in and through the center’s programming, in its experimental learning approach, and in the opportunities that students are inspired and encouraged to pursue. Chaired by Dr. Andrzej Tymowski and Dr. Steven Wheatley of the ACLS, as well as Dr. Stephen F. Teiser of Princeton University and Dr. Donald Lopez of the University of Michigan, the Ho Foundation Fellows, recipients of an award open to international scholars, were offered an intimate, supportive environment in which to share and discuss their work—another way in which the Ho Foundation’s mission of creating a supportive network has manifested.

Dr. Tymowski, who has a long and distinguished reputation for promoting scholarship, offered this insight: “The overall mission is to make this an international community of scholars who work together for each other and think of themselves as working in a field and working on a common enterprise.” This community-creating event takes place every year, with Ho Foundation Fellows and senior scholars continuing and building upon their relationships with the Ho Foundation and each other beyond the symposium. Dr. James Benn speaks at a roundtable at the Royal Ontario Museum during the recent 18th IABS Congress. Photo by Jackie Shapiro

The Centre for Buddhist Studies and the ACLS also jointly sponsored a roundtable at the Royal Ontario Museum during the recent 18th IABS Congress. Open to the public and hosted by ACLS president Dr. Pauline Yu, the roundtable sought to investigate ways to bridge divides in Buddhist Studies. Three scholars were invited to “reflect on the degree to which their own specialties have become barriers to bridging divisions,” exploring the postulate that, like the tradition it investigates, the field of Buddhist Studies has shown a tendency to subdivide. Speakers included esteemed scholars such as Dr. James Benn from McMaster University, Dr. Amanda Goodman from the University of Toronto, and Dr. Juhyung Rhi from Seoul National University.

Such strategic programming, hosting, and promoting of Buddhism and Buddhist Studies at the university and beyond are the result of the expansive vision of Mr. Ho and his family. One can clearly see the lasting and sustainable impact being fostered at the center through its holistic approach and program of workshops, film series, and collaborations across the university and with communities locally and internationally. By inviting scholars and the public to engage in a sensory experience of various cultures sharing a common thread of the history of tea drinking, different strands of Buddhist thought and cultural practices are also imbibed and discussed. This unique workshop seeks to provide participants with a diverse yet unifying view of different Buddhist practices that, at their core, are all rooted in the teachings of the Buddhadharma. We hope that the center can serve as a model for the future of Buddhist Studies in a university context that seeks to learn, to educate, and to share its resources.

Theravada Buddhism and Teresian Mysticism: A Reflection on Interreligious Dialogue
Buddhistdoor View: Mahayana Buddhism’s Unique Place in History and Chinese Civilization
Huayan Buddhists on Equality in Diverse Societies
What is Attained through Amitabha-Recitation?