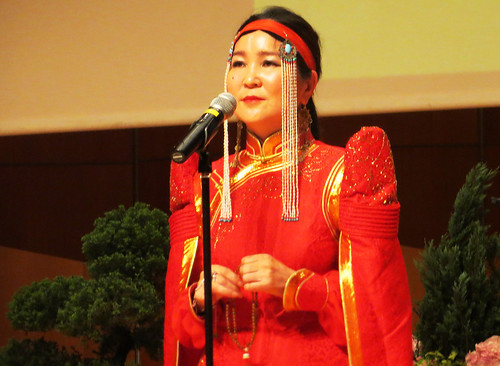 Chod chanting by Kunze Chimed during the cultural program of the Sakyadhita
Conference in Hong Kong. Image courtesy of the author

Kunze Chimed is one of the brightest examples of a yogini who follows and preserves the ancient traditions of Buddhist women in Mongolia. She is a well-known singer, who has taught Chöd (the Tibetan practice of Cutting Through the Ego) in Mongolia, Russia, and the United States. She learned this practice from one of her teachers—His Holiness the 9th Khalka Jetsun Dampa Rinpoche (1932–2012). From him,  Kunze Chimed received initiations (Tib: wang), oral transmissions (Tib: lung), and instructions for the practice (Tib: dri) of two traditions of Chöd: The Ear-Whispered Lineage of Ganden and The Ear-Whispered Lineage of Dakinis.

I was fortunate to witness a Chöd performance by Kunze Chimed during the 15th Sakyadhita International Conference on Buddhist Women, held at the University of Hong Kong in June. A few days after the Sakyadhita conference, Kunze Chimed participated in the “First International Chöd—Zhije Conference: The Lineage of Machig Labdrön & Padampa Sangye,” held at the Tara Mandala Buddhist community in the US. At this historic conference, she gave a presentation about the female Chödpas of the Mongolian Buddhist tradition, hosted a Chöd retreat: The Ear-Whispered Lineage of Ganden, and gave a Chöd chanting concert. 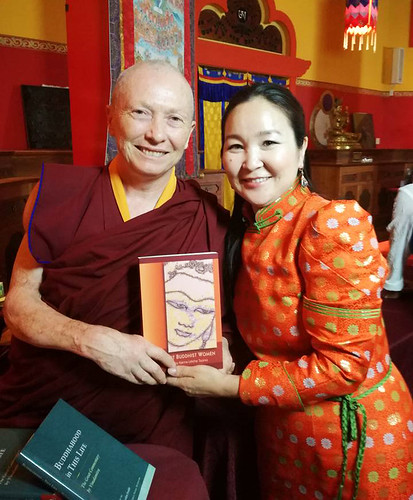 In addition to Chöd, Kunze Chimed also performs a practice dedicated to White Tara (Tib: Dolkar), a Buddhist tantric meditation goddess related to long life and healing. During our discussion she explained that people in Mongolia are in general very devoted to Tara, and that White Tara in particular is her favorite devotional deity: “During the rituals or even at night, whenever I can, I sit in front of an image of White Tara and I pray to her. I feel that wherever I go, she looks after me and protects me. Whenever I feel any suffering or face any obstacles in life, I always pray to her and invoke her liberating power. I also pray for the people who need her support.”

Kunze Chimed composed a special melody for the Tara mantra that can be found on YouTube. She also teaches the Tara Sadhana—one of the basic texts related to this Mahayana goddess—its commentary, and the melody of chanting this particular text.

Another contribution she made to the Mongolian Buddhist women tradition is her research on the incarnations of dakini (Tib: khandro) and Tara. Kunze Chimed has interviewed numerous older Mongolian dakini, who lived during the 20th century. During our talks she stressed that during the communist regime there were many Mongolian yogini who were considered female emanations of wisdom or dakinis, but they had to practice the Dharma in secret, away from society. Because of this researching the hidden history of Vajrayana yoginis in Mongolia has its challenges.

Kunze Chimed also organizes a yearly conference dedicated to Mongolian Buddhist women, held for the first time in 2014 at Gandantegchinlen Monastery—the biggest monastery in the Mongolian capital of Ulaanbaatar. This monastery, whose name means “The Great Place of Complete Joy” in Tibetan, was restored in the 1990s and houses more than 150 monks. It also houses the emblem of Mongolian Buddhism—a statue of Bodhisattva Avalokiteshvara, which is 26.5 meters high. During the third conference, the association of Buddhist women in Mongolia was created, called “Buman Khand” (“Million Dakinis”). Kunze Chimed was elected as the first leader of this NGO when it was founded on 6 July 2016. The organization helps Buddhist women in Mongolia to preserve and spread their tradition. 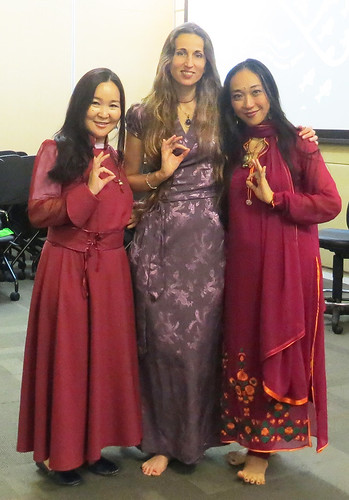 Kunze Chimed, left, with Lianne Hunt, right, and the
author, middle, after the Charya Nritya workshop during
the Sakyadhita Conference. Image courtesy of the author

Kunze Chimed has translated several works, including The Manual of Chöd Practice, The Liberator Mother Tara, and The Four Preliminary Guides of Barom Kagyu Practice. As a mother of two, she combines her extensive Dharma practice and teaching with her family life, being a mother of two. She shared with me how much motherhood had helped her understand some of the fundamental Buddhist concepts like compassion at a deeper level: “When I was young, my parents were very busy with their work. Most of the time, I had to take care of my younger brother and sisters and do the house chores. During this difficult time, I was felt as if my mother and father did not love me, because they did not pay enough attention to me. But when I had children of my own, my work and my regular pilgrimages took up time I could have spent with my children. Since I have had my own children, I understand how much my parents had to suffer in order to take care of us and how motherhood is, in fact, a high practice of compassion.”

Development of compassion and wisdom is the essence of Buddhism. There are many paths that can lead to the realization of these fundamental human values. Undoubtedly, motherhood provides an amazing opportunity for women to open their hearts and develop unconditional love. With her impressive Dharma work and the care she gives to her family, Kunze Chimed sets a remarkable example as a realized women in the patriarchal world of Buddhism.