The Big Buddha in Bodh Gaya. From holidify.com

Myself when young did eagerly frequent
Doctor and Saint and heard great argument
About it and about: but evermore
Came out by the same door where in I went.

— The Rubaiyat of Omar Khayyam

Entry into the Buddhist world through the door of suffering does not offer any guarantee of finding the exit marked “Nirvana.” And I should know.

My 25 years of experience as a Buddhist in India began in 1992, when I was introduced to Buddhism through the Soka Gakkai organization at a time that I had been falsely accused of dacoity (violent robbery committed by an armed gang), theft of property, house-breaking, and a host of other charges, with the intent of having me and my family evicted from our home.

My wife and I left Soka Gakkai after a few years (because we had a tendency to ask too many questions and challenge the organization’s doctrinal errors), but still with a keen interest in Buddhism, I founded the Dharma Rain Centre in Bombay in 2003, intended as a non-sectarian center where young people could come and discover the treasures of the Dharma. In addition, I became involved in organising teachings for His Holiness the Dalai Lama, and met various Buddhist teachers from almost all Buddhist traditions. I was also involved in the International Network of Engaged Buddhists (INEB), and in some of the organizations working with followers of the Indian scholar, social activist, and reformer Dr. B. R. Ambedkar. Today, I have the good fortune of being counted among the students of Dzongsar Khyentse Rinpoche.

Reflecting on the past 25 years of being a Buddhist, it strikes me that my personal history seems to be connected to the history of Buddhism in India. In one way or the other, I have been closely connected with all three major markers of the Buddhist revival in India: the growth of Tibetan Buddhism with the arrival of His Holiness the Dalai Lama, the spread of the Buddhist movement that began with Dr Ambedkar, and the rise of new Buddhist groups and movements such as Soka Gakkai.

Also interesting is that all these movements started within a period of a little over five years from one another: on 14 October 1956, Dr. Ambedkar converted to Buddhism along with 600,000 of his followers, thus fulfilling a pledge he made in 1935 that though he had been born a Hindu, he would not die a Hindu. In March 1959, the Dalai Lama set foot upon Indian soil as a refugee, and what the world had so far perceived as a trickle of Tibetan refugees, became a tidal wave that swept Tibetan Buddhism into India and the West. And in February 1961, Daisaku Ikeda, the third president of Soka Gakkai, visited Bodh Gaya, where he buried a copy of the Lotus Sutra and a plaque inscribed with a vow to help actualize peace and prosperity in Asia. In the years that followed, he began to grow as a cult figure, with an ever-increasing following in India.

In this article I will share my views on the first of these markers: the conversion of members of India’s Dalit community to Buddhism and the implications this has had on Buddhism in India. In subsequent articles, I will address other markers of the Buddhist revival in India.

Since my time as a student and a political activist, I have known of the mass Buddhist conversion at Nagpur under the leadership of Dr. Ambedkar, but it was when I came to know Dhammachari Lokamitra of the Trailokya Bauddha Mahasangha Sahayaka Gana (TBMSG)* in Pune that I really understood both the impact of Dr. Ambedkar’s legacy and the problems of this movement. Members of the Dalit community hold aloft an image of Dr. Ambedkar. From dnaindia.com

At that time I had already met His Holiness the Dalai Lama and was beginning to organize the Dharma Rain Centre in Bombay. As I started to organize the teachings of His Holiness, I quickly realised that while, in general, there was a growing interest in Buddhism, those who were attracted to His Holiness’ teachings as well as to Dharma Rain meetings were mainly from an upper class and upper caste background. This was something I also noticed in Soka Gakkai, where they gave us explicit guidelines that persons from “Scheduled Castes”** and other Buddhist schools should not be brought into the organisation. This attitude of discrimination, viewing these new communities as second class Buddhists, has kept Buddhism from growing and flourishing in India.

What is little known to most Indians is that Dr. Ambedkar passed away on 6 December 1956, barely six weeks after the conversion ceremony at Nagpur, leaving masses of fresh converts and many hundreds of thousands that would soon follow in his footsteps, without coherent leadership. This movement, with a community of more than 10 million Buddhists*** all over India, is often ctitisized as being mainly a political manoeuvre that has little to do with faith or religion. It is astonishing to me that while this vast cross section of Indian Buddhists receives increasing worldwide attention for their devotion to the Buddha, their devotion to their teacher “Babasaheb,” and their struggle to uplift themselves against the most inhuman odds, they are summarily dismissed as a mere political formation in India.

There are even initiatives led by religious nationalists and fundamentalists to prevent these conversions, with the state very much complicit. Laws, euphemistically dubbed “Freedom of Religion Acts,” effectively ban conversions through the exercise of administrative power. Many of these laws require people who desire to convert to a different religion to provide the government with one month’s notice, or face fines and penalties. Though it may be argued that these laws are directed against missionaries, it is often the potential converts who face humiliation and even rioting by fundamentalists who feel their actions are justified by these laws.

When, in October 1956, 600,000 men and women decided to discard a millennium of degradation and poverty by embracing Buddhism under the leadership of Dr. Ambedkar, they probably did have a faint hope that this move would improve their social status. But even so, does it entitle us to reject and discard the aspirations of millions of people, many now third-generation Buddhists after their grandparents became the first converts?

Another major criticism of the movement, often used to bolster the first, is that even when it comes to Buddhism “these people” (the converts) have an incomplete and distorted view of the Buddha’s teachings. Dr. Ambedkar is often referenced as stating that he did not believe in karma or rebirth, which he saw as views embraced by the Hindus to keep the lower castes in shackles over the centuries. It is true that some of these views were expressed in his book The Buddha and His Dhamma—an effort to put all the myriad teachings of the Buddha in a one-volume format. However, the followers of Dr. Ambedkar are not the only Buddhists who reject the concept of rebirth. The tradition of Lin Chi Zen from which Ven. Thich Nhat Hanh hails, also has adherents who reject the orthodox Tibetan Buddhist view of a mind-stream separate from the body that continues from rebirth to rebirth.**** Yet upper class Indians continue to regard Ven. Thich Nhat Hanh as one of the truly great Buddhist teachers of our times (a view with which I agree).

In addition, Indian Buddhists are often uncritical of their own Buddhist practice, yet they presume that they are in a position to judge converted Dalits. Those in India who follow Tibetan Buddhism and sometimes even consider themselves dakas and dakinis***** (I’m not joking!) are often only too willing to conflate their admiration for a certain kalyanamitra (spiritual friend), calling their kalyanamitra their teacher or guru without any master-disciple vows having been exchanged. They think they know Buddhism because they follow their “guru,” yet this often takes the form not just of admiration for the teacher/guru, but even uncritical and unquestioning worship. 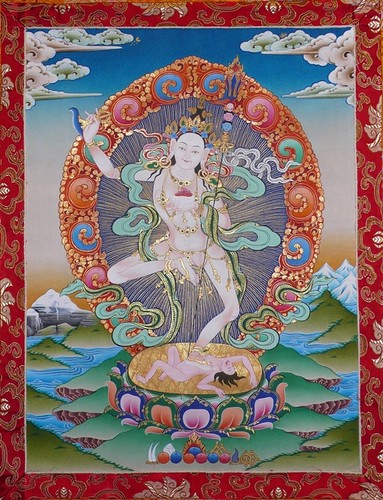 A dakini, or sky dancer, a type of spirit in Vajrayana Buddhism.
From bodhisattvabodywork.com

The Vajrayana path, which has become increasingly popular in India, hinges on the guru and guru-devotion. However, we should consider how guru-devotion works in India. With a caste-bound, hierarchical, patriarchal, and authoritarian mindset so often characteristic of Indian society, it is easy to completely surrender to the “guru,” without examining your his or her qualifications and background—as the Dalai Lama so often advises. All critical thinking goes overboard.

While His Holiness urges us to use our intelligence to the maximum, many of us have never developed or have even lost the faculty of critical thinking and discernment. I have found that sometimes those who practice mindfulness the most, are often the most mindless in their interactions with the real world. Certainly the fault lies not in the practice, but in the practitioner. As my teacher, Dzongsar Khyentse Rinpoche says, “The issue is not the tea, but the tea cup. The Dharma teachings are like tea, while all other means to actualize these truths—practices, rituals, traditions, and cultural trappings, are like a cup.” Likewise, even though we think the Dalits have not understood Buddhism correctly, they still follow the teachings despite of this lack of “clarity” (which as I mentioned above, is something that can be said of many practitioners). And even if we have a superior understanding, it is still incumbent upon us to help them better their understanding, with respect and patience.

We are truly in the era of the Latter Day of the Law, or as the Japanese say, the age of mappo (the Dharma-ending age). In the Lotus Sutra, the Buddha preaches the difficulty of upholding the true Dharma in this age, saying:

“If you were to seize Mount Sumeru and fling it far off to the
measureless Buddha lands, that too would not be difficult.”

Having completed this article, having shared my thoughts with you, I feel I have tried to seize Mount Sumeru and throw it over the horizon. Though my guru may admonish me: “Do not try to bite off more than you can chew!”

* A Buddhist movement originating in Maharashtra, the Indian wing of the UK-based Triratna Buddhist Community founded by Sangharakshita, which had ties with D.r Ambedkar in the 1950s.  Dharmachari Lokamitra is one of Sangharakshita’s earliest and most senior students who came to India from the UK and helped to set up the social and Dharma work the organization is now known for in India.

** “Scheduled Castes” refers to the Schedule in the Indian Constitution that lists the lowest of the castes, including the former “untouchables,” who are eligible for certain concessions and reservations as part of affirmative action.

*** Some put the number as high as 20 million, depending upon their sources and the kind of reliance they place on Indian census figures, considering that even the census enumerators, many who are from the upper castes, are often reluctant to record the actual number of Buddhists.

**** As stated by Ven. Thich Nhat Hanh’s main disciple and representative in India, Dharmacharya Shantum Seth, during a one-day retreat organised in Bombay by Dharma Rain, in an anwser to the question, “In your tradition do you accept the idea of a mind-stream separate from the body, which continues after death?” Dharmacharya Shantum Seth’s answer was “No.”

***** A type of spirit in Vajrayana Buddhism.