Kūkai altar at Muryōkōin on Mount Kōya, Photo by the author

In the early 9th century, two Japanese Buddhist monks who were dissatisfied with the mainstream forms of Buddhism in Japan at that time (the so-called six schools of Nara Buddhism), Saichō (767–822) and Kūkai (774­–835) traveled to Tang China in search of more rigorous forms of Buddhist practice. While the former stayed in the east and practiced mostly on Mount Tiantai, the latter went to the ancient capital Chang’an, where he encountered Vajrayāna—i.e., esoteric—Buddhism and studied under Master Huiguo (746­–805).

Kūkai returned to Japan in 806 to found Shingon Buddhism and to spread his teaching of “becoming a Buddha in one’s current body” (Jpn. sokushinjōbutsu). I wrote about this idea in a previous essay.* Here, I would like to focus on his outline for becoming a Buddha in 10 steps described in his “Ten Mindsets”** (Jpn. Jūjūshinron). In this text he uses his system of “ranking the doctrines” (Chn. panjiao) to map the way from ignorance to wisdom, from suffering to liberation, and from hiding to manifesting Buddhahood.

1) The Ram-like Mind of Common People

To Kūkai, hedonism, the belief that following one’s desires leads to happiness, reflects the most naïve attitude possible for human beings. If we give in to and prioritize our desires, we behave like animals driven by their instincts. In this case, we not only relinquish our free will, we also surrender to the delusion of an independent self and the artificial discrimination between self and other.

2) The Abstinent Mind of the Foolish Child

Moral teachings, such as Confucianism, teach us to look beyond the needs of our own self and see the other. Kūkai’s name for the moral self, “the abstinent mind of the foolish child,” seems to indicate that the self at this stage acts out of fear and blindly follows the advice and rules of others, our parents, our teachers, or the government, but is not yet free. 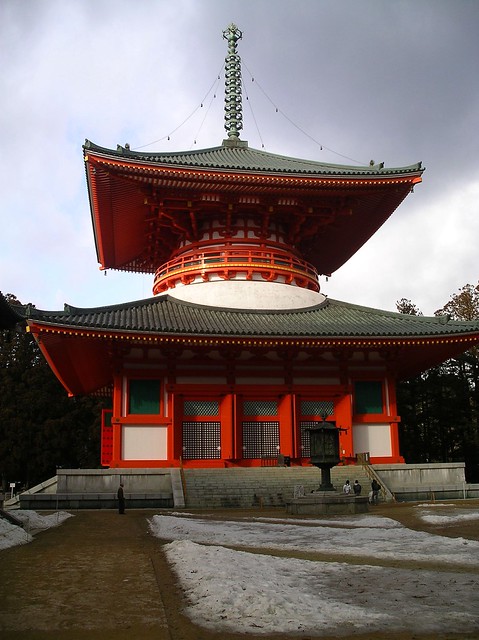 The Garan (Great Pagoda) on Mount Kōya. Photo by the author

3) The Fearless Mind of the Young Child

Religious systems such as Hinduism and Daoism, to Kūkai, add to the life of the self the transcendent dimension, i.e., a reality that lies outside of us. At this stage, the self realizes that reality is not limited to and restricted by our lives or even our social realities. There is something larger than us. The hope for and promise of an afterlife takes away the fear of annihilation and meaninglessness that we face so often in our lives. We realize that our purpose does not depend on our survival and the survival of our communities.

4) The Mind of Aggregates-only and No-self

However, the self on stage three succumbs to the belief in and desire for an eternal life and thus does not understand that our reality is characterized by selflessness and impermanence. The early Buddhist teaching of the three characteristics or marks of existence (Skt. trilakṣaṇa) cures this delusion. We are neither independent nor eternal. As the Buddhist teaching of no-self (Skt. anātman) explicates, we are but the agglomeration of five elements (Skt. skandhas)—body, perceptions, feelings, intentions, and consciousness—that form a functional unity.

Once practitioners realize the true nature of our existence, suffering, impermanence, and selflessness, they eradicate karma, escape the cycle of death and rebirth, and enter nirvāṇa. Mahāyāna thinkers such as Kūkai refer to people who accomplish this feat as pratyekabuddhas, i.e. buddhas who have realized liberation for themselves.

6) The Mind of the Mahāyāna Concerned for Others

According to the teachings of Mahāyāna Buddhism, however, wisdom (Skt. prajñā) engenders compassion (Skt. karuṇā). Kūkai associates this teaching with the Yogācāra school of Buddhism. In his assessment of the teachings of this school, Kūkai praises their commitment to the Mahāyāna teaching but criticizes their fixation on the constructions of the mind. The Goma altar at Muryōkōin on Mount Kōya. Photo by the author

7) The Mind Awakened to the Non-Birth of the Mind

The Madhyamaka school, to Kūkai, takes the twofold emptiness (the emptiness of self and phenomena) seriously and emphasizes the superficiality, and, one could add, provisional character, “of all distinctions.” Mental constructions are just that: constructions. They deceive us into believing that distinctions are essential and give rise to ideologies and practices of discrimination. Based on these false essences, we divide phenomena and human beings into groups and create value-based hierarchies.

8) The Unconditioned Mind of the One Path

While Madhyamaka thinkers understand that phenomena are devoid of essence, they tend, according to Kūkai, to fall into a monism that denies the diversity of human experience and the variety of the Buddha’s manifestations. We are united in our shared buddhahood and unique in the way we express our common humanity. Tendai (Chn. Tiantai) Buddhist philosophy articulates this dialectic of oneness and multiplicity in phrases such as “one thought in three thousand dharmas” (Jpn. ichinen sanzen) and “one is many” (Jpn. issokuta).

9) The Mind Utterly without Any Nature of its Own

The highest and most accurate articulation of reality, Kūkai found in the philosophy of the Kegon (Chn. Huayan) school of Buddhism. According to this philosophy, not only the oneness and the multiplicity of the world, conceived of as “the principle and the phenomena” (Jpn. riji), but also all phenomena, literally, phenomenon and phenomenon (Jpn. jiji) mutually penetrate each other” (Jpn. muge). This means that individual phenomena not only express the oneness of the world and of Buddhahood, but all individual and individually unique phenomena and beings as well. Okunoin: the final resting place where Kūkai sits in eternal meditation on Mount Kōya. From japan-experience.com

10) The Mind of Secret Adornment

The first nine stages Kūkai classified as exoteric teachings. These teachings have to be internalized and expressed by the practitioner. To this purpose, Kūkai transmitted and, to some degree, founded the esoteric (Jpn. mikkyō) school of Shingon Buddhism. He inherited and developed mandalas and intricate rituals designed to facilitate individual and unique expressions of the underlying oneness, as well as the evident multiplicity of the world.

Beyond the outline of Kūkai’s school of Buddhism, however, I think these 10 stages tell us a lot about how to live as aware citizens of the world. They confront us with our desires and our strategies to justify our learned behaviors. They outline a path of how to live more authentically. They exhort us to question our categories that we use to divide the world and reject people deemed as different. They encourage us to discover underlying similarities and appreciate individual differences. And, finally, they embolden us to express this oneness in social, moral, and religious practices.