Anoma with her exhibit Earth, Rise within Us at Sotheby’s Hong Kong, 14 April 2016. Image courtesy of Anoma Wijewardene

The themes of the Silk Road, spirituality, and the environment rarely come together in contemporary art, so I feel fortunate to have recently met an artist whose work has addressed this threefold intersection. Sri Lankan-born Anoma Wijewardene had been invited with 12 other women (among them veteran designer Vivienne Tam) to participate in the One Belt One Road Visual Arts Exhibition at Sotheby’s Hong Kong Gallery earlier this month. Hosted by the Hong Kong Federation of Women from 12–16 April, the exhibit’s objective was to showcase the artistic diversity of contemporary female artists from the various countries along the ancient Silk Road.

In the vision of the China-led One Belt, One Road (OBOR) project, the 21st century Silk Road encompasses the entire geopolitical, economic, and cultural ecosystem of Eurasia that stems from its interconnected peoples and cultures, and includes both land and sea routes. It involves countries not traditionally included on the overland routes, such as Sri Lanka, and even regions once excluded from the Silk Road, such as the coast of Africa and Western Europe. For many nations, the OBOR initiative is the biggest geopolitical, economic, and cultural project of the 21st century. The Sotheby’s exhibit was curated by Macau businesswoman Pansy Ho with the endorsement of a number of local politicians, such as Hong Kong’s chief executive Leung Chun-ying and ex-chief secretary Henry Tang. 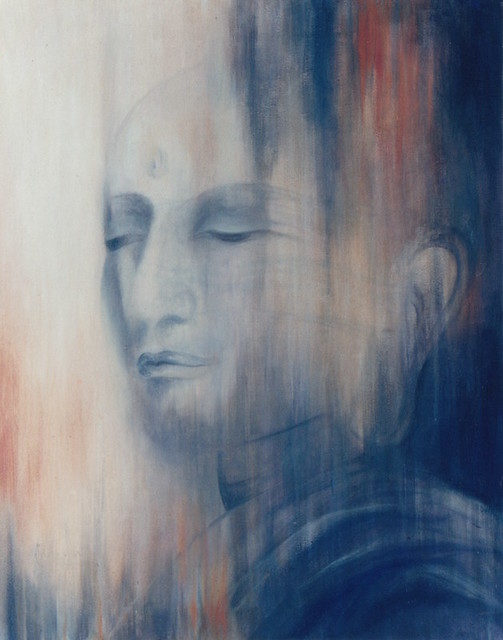 A graduate of the art school Central Saint Martins in London, Anoma initially spent 25 years working in design. In 1993, however, she returned to Sri Lanka to devote herself fully to her art. Since 1999, recurrent themes in her exhibits have been visualized presentations of the elements: earth and rock, air, and water. Ever since Aqua, an exhibit hosted in the Maldives in 2009 (and in Dubai in 2010) to highlight climate change and the consequences for the endangered island nation, her art has reflected her concern about the changing relationship between the sea and the Earth.

Anoma described her installation at Sotheby’s as having an “ethereal rockiness” or “fragile solidity.” Called Earth, Rise within Us, it was the only artwork in the show to relate to geology, and featured multiple layers of ancient rock formations expressing the majesty and antiquity of the Earth. She said that through the exhibit, she sought to touch a primal chord within viewers in regard to nature’s vastness and antiquity, be it reverence, awe, or the urge to return to something greater than humanity. 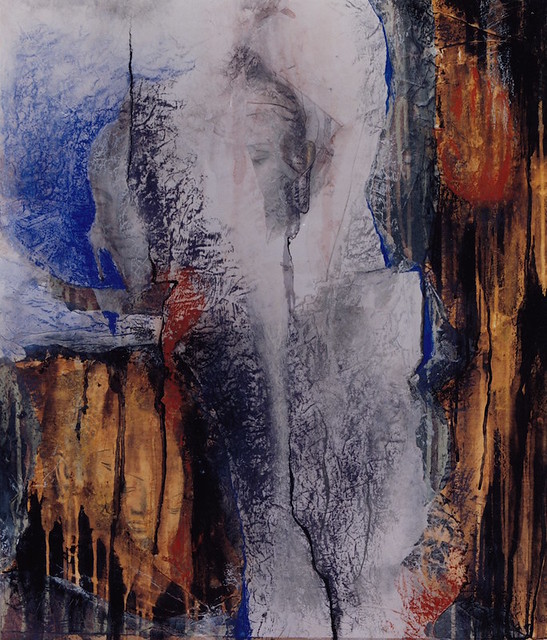 She paid close attention to the results of COP21 in Paris at the end of last year, and remains dissatisfied with the climate commitments of the world’s nations. “It’s better than what we had at Rio,” she said. “Everyone is signing the agreement to keep the global temperature from going over 1.5 degrees Celsius. But the commitments are all unbinding, and there are huge disagreements between endangered nations like Mauritius and industrialized countries. It’s perhaps not too late, but we’re dangerously close.” 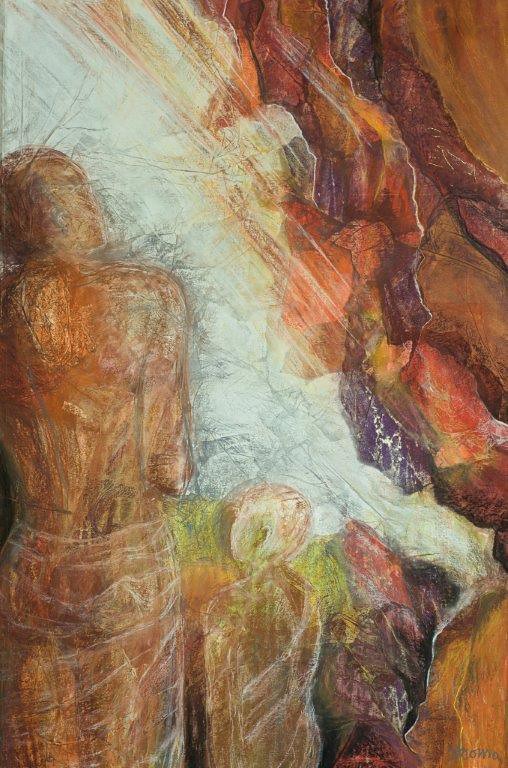 Waiting for Deliverance, by Anoma Wijewardene

She spoke highly of two associates who were in Paris at the time delivering the Buddhist Climate Change Statement to French president François Hollande. They were the Sri Lankan monk Ven. Ratana Thero and Dr. Ranil Senanayake, Sri Lanka’s foremost conservationist and chairman of Rainforest Rescue International. I suggested that Buddhists in Sri Lanka were steadily becoming some of the most outspoken advocates of climate control measures, particularly in light of the statement and how other religious traditions are mobilizing their followers to advocate for our world’s future. “Religions are realizing that people are suffering tremendously from the effects of climate change and environmental destruction,” agreed Anoma. “This will help to shift government policy in the right direction.”

Anoma’s 2005 Sydney exhibit Space was the first of her works to explicitly express the desire for reconciliation between humanity and the environment. In 2012, she showed at an HSBC-sponsored solo exhibit called Deliverance in Rio de Janeiro, during what she criticizes strongly as the “disastrous” climate change summit that saw developed and developing nations alike walking away from the table. The Sri Lankan poet Ramya Chamalie Jirasinghe, who is also deputy director to the United States-Sri Lanka Fulbright Commission, contributed several English verses to Deliverance. Ramya told me that it was a “huge honor” for her to have been asked to write poetry for Anoma, whom she praised as Sri Lanka’s greatest living artist. “I think her work touches a chord in me at a subliminal level, in complete harmony with all that I love and believe in. There is never a need to plan what I write—just one encounter with her creations and a poem flows in ‘one take,’” she told me. 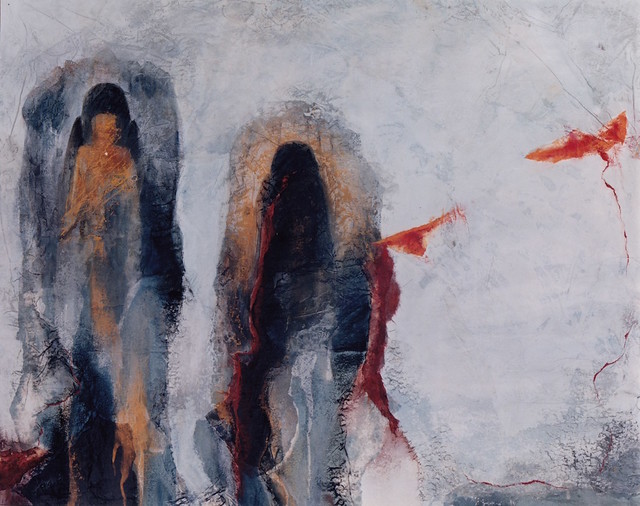 Like Anoma, the Buddhist Ramya is keenly interested in the intersection between spirituality and the environment, although her focus in her poetry and studies as a PhD candidate is less on the aesthetics of geology and ethereality and more on trees and gardens (and currently on urban forestry). “There are many activists (both Buddhist and non-Buddhist) in Sri Lanka who are doing fantastic work for environmental and wildlife protection, because of whom we have managed to halt some terrible ecological disasters instigated by politicians or policymakers. I feel that if Sri Lankan policymakers and the leaders of institutions of Buddhism focus on and call on the people to turn towards the practice of renunciation and letting go of greed, hardheartedness, and delusion, that inner transformation will result in a changed society that then will not need policy or legal frameworks for the protection of the environment, as it will change patterns of demand and supply.”

However, she also had some words of critique. “Real Buddhist practice can only result in the careful and minimal use of natural resources (when a lifestyle is devoid of mercenary greed and self-fulfillment) and compassion towards all living beings. Unfortunately, few senior Buddhist monks, politicians, or policymakers in Sri Lanka advocate a lifestyle of frugality and harmony and an inner transformation. The Buddha's lifestyle, his abiding respect for the environment and the tree that gave him shelter, is a message that needs to take center stage in a world that clearly needs to look at a new way of engaging with material resources if the world is to survive and remain habitable.” 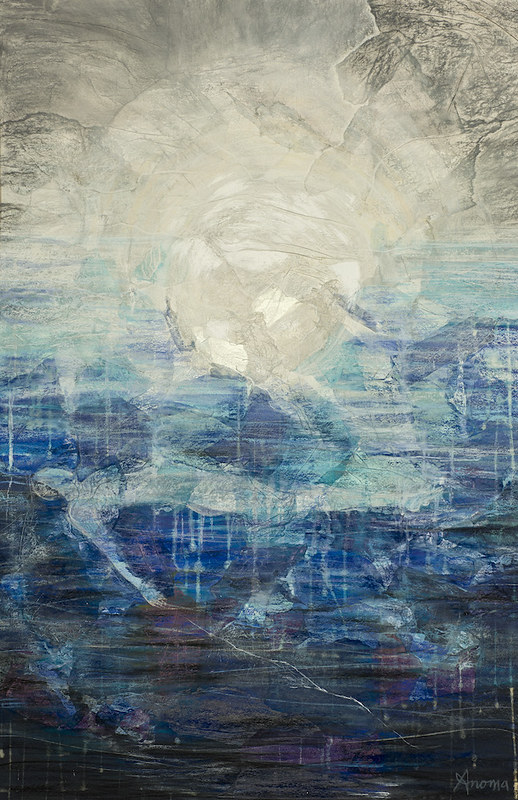 Each cerulean sea Swells through our veins, by Anoma Wijewardene

To what extent can art, be it painting or poetry, raise awareness about social and environmental crises? “The best way of raising awareness is experiencing an earthquake or some other natural disaster,” said Anoma bluntly. “I have to say that people often don’t act unless it affects them directly. But they also might not be interested in the statistics and science.” She believes that art can make a subtle difference as a form of soft diplomacy that leads one gently into awareness and activism. “Art is all about passion in a way that science might not be for the non-scientist,” she laughed. “People might ignore the studies and disaster photos, so instead of appealing to the head, I suppose I’m appealing to the heart.”