Ajanta - A Portrait of Faith 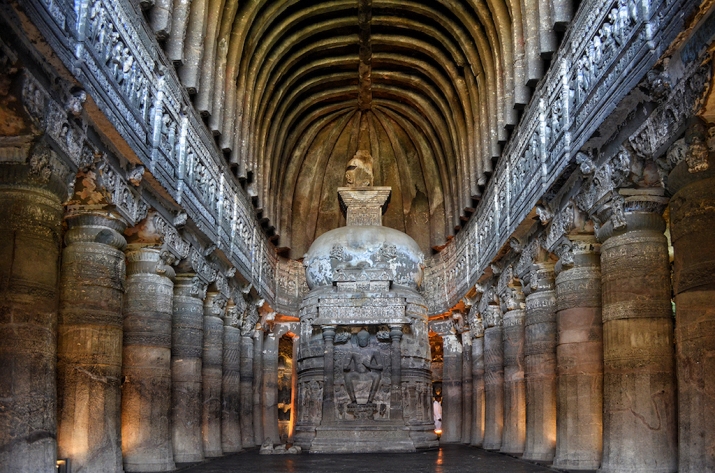 Cave 26 - a "chaityagriha"
“One must be deeply aware of the impermanence of the world.” - Dogen
Once upon a time, between the rolling hills of the Maharashtra plateau in the west of the Indian subcontinent, in the middle of a lonely glen with a stream descending in a waterfall of seven leaps called Satkund, caves were cut into the heart of the rock so that devout Buddhist monks could live and pray here in the serenity of the verdant beauty, away from the busy world. The local people call this place Rangit Leni, or “Colored Caves,” but to the rest of the world, the site is known as Ajanta. Cave 4
One of the oldest monasteries in India and indeed, in the world, the caves were created from around 200 BCE to 650 CE and are now a UNESCO World Heritage treasure. Although the two dynasties that were the royal patrons of the caves—the Satavahanas and Vakatakas—were practicing Brahmanism, they actively allowed Buddhism to flourish in their land. Besides the kings, rich merchants and other wealthy people also made donations for the excavation of the caves. At Ajanta, as at other ancient Buddhist monasteries, great emphasis was placed on teaching, and the caves had designated functions—for living, teaching, and practice. There are 30 caves altogether, including some that are unfinished: five are chaityagrihas (prayer halls containing a stupa at one end), and the rest sangharamas or viharas (the monastic complex). Parinirvana, Cave 26
The earliest caves were used by Hinayana Buddhists, and were excavated following the spread of Buddhism in the two centuries before and after the Christian era. At this time the Buddha was never represented directly; rather, his presence was alluded to by a symbol, such as a stupa, the Bodhi tree, footprints, or the Wheel of Law. The caves from the second period appear to have been used by Mahayana practitioners, but do not have the features associated with later Mahayana Buddhism. In the caves from this period, the overwhelming majority of images represent events in the Buddha’s life and Jataka tales, or stories of his past lives. At the same time, under the influence of the polytheistic beliefs of the Mahayana, devotion to bodhisattvas began to have an irresistible appeal to Buddhist laypeople, and the bodhisattvas that had hitherto been represented as attendants of the historical Buddha were now carved and painted independently. Avalokiteshvara was particularly popular, and there are also impressive images of Vajrapani. The painting style in the Ajanta caves is unique, and shows a poetic dynamism. With only six pigments available (yellow, red, blue, green, white, and black), the artists created the vocabulary of the entire color range. Murals survive from both the earlier and later groups of caves. The themes are intensely religious in tone, and as mentioned above, mostly center around the historical Buddha and bodhisattvas, but at the same time they depict the whole gamut of human life. The ancient civilization of India comes alive here, with men, women, and children of all stations, from the king to the slave, the rich to the beggar, the saint to the malefactor. The paintings are mirrors of contemporary life; they are an insightful documentary of contemporary beliefs, and present a vivid picture of people of different origins and ethnicities. Above all, they are windows through which one can glimpse the heavenly world of gods and semi-divine beings like yakshas, gandharvas (divine musicians), kinnara, and apsarases (heavenly dancers). For the caves to come to be what they are today required the striking of chisels, the chanting of prayers by thousands of people, and the poetical journey of brushes on walls for innumerable hours.

The creative period of Ajanta ended as mysteriously as it began. The Buddhists deserted the caves, leaving them abandoned and forgotten by the world. We don’t know why it occurred—perhaps the trade route was cut off or the wealth that financed the caves was exhausted. The jungle grew back and the caves were hidden for more than a thousand years, unvisited and undisturbed. The beat of Ajanta gradually ceased and was immersed in deep sleep. "Mahajanaka Jataka," Cave 1
After centuries of neglect, the caves were accidentally and dramatically rediscovered in 1891 when a British hunting party happened to visit the crescent valley of the Sahyadari area on a tiger-hunting expedition, and one officer sighted the upper part of the highest facade of one of the caves. The cave was already in use by local people, who prayed there around a small fire, but the place had otherwise long been home only to birds or large animals. The officer named the caves “Ajanta” after the village five kilometers away. Since then the name has gained in recognition, and the hidden treasures of the caves’  majestic artistry have in recent times been unveiled to the world.
Needing to project their faith onto an enduring material, the artists chose solid rock, but on even this medium the tempera paintings have faded through long exposure to the elements. However, the fact that they were hidden and unknown for more than thousand years has to some degree helped the preservation of the artworks, to the extent that some of the images are in good condition even today. The issue of preservation has been the main focus of many conservators. The causes of deterioration have been studied, and suitable methods used to prevent further decay.
Today, with humble appreciation of the enormous energy, artistic expression, and infinite patience of the ancient artists who had the courage to challenge the very body of the rock, we are trying to save and prolong the life of one of the greatest treasures of the world.
Lera Grant-Evdokimova is a member of Dharma Eye–The Buddhist Photographer Collective. To learn more about Dharma Eye and Lera’s work as a photographer, visit Dharma Eye.
References
Archaeological Survey of the Government of India. 1997. Ajanta Murals. New Delhi: Archaeological Survey of India.
Aswan, Heera. Colourful Ajanta and Ellora. Agra: Shri Nath Book Stall.
Mitra, Debala. 2003. Ajanta. New Delhi: Archaeological Survey of India.