With the US election on 8 November less than a month away, Americans are readying to go to the polls to elect the country’s next president. In the state of Massachusetts, voters will also be making their voice heard on proposed legislation popularly known as “Question 3” or, by its full name, the “Prevention of Farm Animal Cruelty Act.” Under existing requirements laid out by state law, living conditions for farm animals are much lower than for domestic animals. The purpose of the proposed bill is to “prevent animal cruelty by phasing out extreme methods animal confinement, which also threaten the health and safety of Massachusetts consumers, increase the risk of foodborne illness, and have negative fiscal impacts on the Commonwealth of Massachusetts.” (Mass.gov)

One person who will surely be voting “yes” on Question 3 next month is Massachusetts resident and long-time Buddhist practitioner Wendy Cook. This past summer, Wendy, who rents a garden plot on Codman Community Farms, an educational non-profit organization in the historic town of Lincoln, witnessed rabbits being kept in distressing, overcrowded conditions and decided to take action by putting compassion first.

Wendy has been renting garden plots on Codman Community Farms for four years, growing mainly vegetables such as beans and potatoes. In April each year, new plots are assigned and people begin to cultivate their plots. In May, Wendy heard from one of her gardening friends that the farmer had introduced rabbits—the first time rabbits had being raised on the farm—with the intent of selling them for meat. At first Wendy stayed away from the structure in which the rabbits were housed and concentrated on working her own plot, but encouraged by her friend she decided to take a closer look. Approaching the shed-like structure, which was just a two-minute walk from her plot, Wendy pulled back a tarp and, in her own words, was “really shocked and horrified at what I saw.” Inside she found some 120 rabbits housed in very small, dirty cages with poor air quality. Wendy immediately took photographs of the scene before returning to her own garden and sharing the discovery with her friend.

Back home later that day, Wendy decided to voice her concern to the farm’s board of directors. The board encouraged Wendy to detail her position and findings in a letter, which she did, emphasizing the poor conditions she had witnessed and the suffering of the rabbits. Acknowledging that other animals being raised on the farm, such as chickens and pigs, had plenty of outside space and good living conditions, Wendy emphasized that the rabbits were the focus of her concern. Her friend cast a supporting vote by submitting her own written complaint.

The board called a meeting with Wendy and her friend, the farmer, and other concerned parties. Unfortunately, the meeting was scheduled for 6 July, coinciding with the 81st birthday of His Holiness the Dalai Lama. As a student of His Holiness, Wendy had planned to attend a puja for the occasion held at Kurukulla Center for Tibetan Buddhist Studies in the city of Medford. Torn between obligations, Wendy meditated on a message of His Holiness that encourages conflict resolution through discussion and dialogue, and eventually decided that working to improve the living conditions of the rabbits at Codman Community Farms would become her puja for the year. She made a personal commitment to attend the meeting with respect for the involved parties and without anger, yet strong in her conviction. 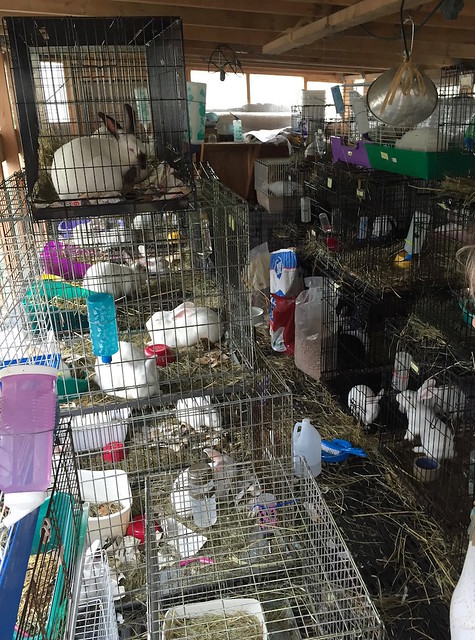 Temporary accomodation for the rabbits. Photo by Wendy Cook

Originally, Wendy had intended merely to seek the release of the rabbits from their confinement, but a couple of days before the meeting she started to think that perhaps she would buy the business outright and instead give the rabbits a “good life.” At that point Wendy also decided that if she were successful, she would dedicate the merit of her act to the long life of His Holiness and to the long life of her primary teacher, Lama Zopa Rinpoche.

With her heart and mind aligned in purpose and conviction, Wendy attended the meeting. About two-thirds of the way through the proceedings, the farmer explained how much had been invested in raising the rabbits, and that it was a specialty part of his business. Wendy asked how much it would cost for her to buy out the operation and the farmer replied US$20,000. “Without really skipping a heartbeat,” recalled Wendy, she immediately replied: “Yes.”

At that moment, Wendy recalls feeling an overwhelming sense of conviction, clarity, confidence, and empowerment. She realizes now that buying the rabbits was what she had really wanted, and even though she had a lower figure in mind going into the meeting, she acquiesced. “I realized that this was a window,” Wendy says. “It was a window for me to reach in and rescue those rabbits.”

To Wendy’s concern, one member of the board expressed reservations about her decision, and did not agree to get out of the rabbit farming business altogether, so Wendy found herself conducting further negotiations about the purchase over the subsequent weeks. Eventually an agreement was reached and the rabbits were moved to a temporary structure on the farm until Wendy could find them a permanent home. At first she thought she would be able to house all the rabbits with a single non-profit organization, but when that turned out to be unfeasible she had to quickly make other plans. 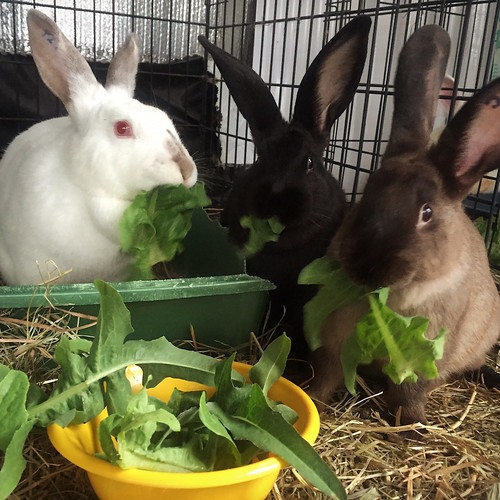 The rabbits being well fed. Photo by Wendy Cook

Wendy explains that Lama Zopa Rinpoche teaches that when one has obstacles or is sick, one can liberate animals as a remedy to the obstacles or sickness. Wendy has been practicing animal liberation for long time, with worms and lobsters. The organization of Lama Zopa Rinpoche, Foundation for the Preservation of the Mahayana Tradition (FPMT) has been her inspiration for this practice.

In order to secure the funds needed for the purchase, Wendy contacted a monk in Singapore, where the FPMT has liberated hundreds of thousands of animals, mostly shellfish, in the last 10 years. The shellfish would be purchased from seafood markets, then an extensive blessing ceremony would be performed before the shellfish were returned to the sea. The purpose of this act is not only to save the lives of the animals, but also to give them a connection to the Buddhadharma that can ripen in a future life.

The monk in Singapore was successful in securing the needed funds for Wendy, and the purchase of the rabbits was finalized. Wendy brought monks to the farm in Massachusetts to perform the same blessing ceremony, then the rabbits were dispersed to the care of various homes, animal shelters, and non-profit organizations throughout New England. Wendy also kept several herself, which she cares for at her home. 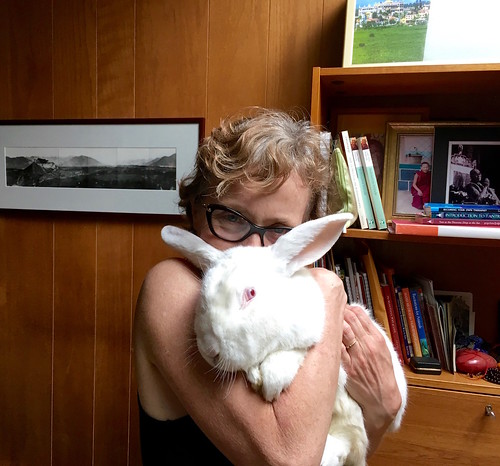 Wendy Cook with one of the rabbits she rescued. Photo by Nick Ribush

While the US election discourse continues to sink into unprecedented mire of negativity, a compassionate vote for the “Prevention of Farm Animal Cruelty Act” next month could help to create favorable conditions in the state of Massachusetts for more humane and ethical treatment of animals, in line with the Buddha’s teachings of compassion for all sentient beings.

An Act to Prevent Cruelty to Farm Animals (Mass.gov)
Foundation for the Preservation of the Mahayana Tradition
Kurukulla Center for Tibetan Buddhist Studies