This article is published to coincide with the birthday of Trulshik Rinpoche’s yangsi on 25 July.

Kyabje Trulshik Rinpoche, Ngawang Chökyi Lodro (1924–2011), was the incarnation of Zhadeu Trulshik Kunga Rinchen of Dzarong in Tibet. An emanation of the bodhisattvas Vajrapani and Manjushri, he was one incarnation in a succession of births manifested to benefit beings. They include, in India, the Buddha’s disciple Ananda; the master Aryadeva; and the abbot Shantarakshita; and in Tibet, Thönmi Sambhota, King Songtsen Gampo’s minister and the author of the first texts on Tibetan grammar; the great translator Vairotsana; Milarepa’s disciple Rechungpa; and the omniscient Longchenpa. More of Trulshik Rinpoche’s previous lives are mentioned in the prayer to his successive rebirths.

Trulshik Rinpoche’s father, Tenzin Chödar, was a descendant of the Indian Licchavi clan, and his mother, Jamyang Wangmo, was a descendant of Önrey Dharma Senge, the nephew of Tsangpa Gyare, who founded the Drukpa Kagyu lineage. Trulshik Rinpoche’s parents lived in Önrey’s house near Yamdrok Taklung in Tsang, Central Tibet, and he was born in Önrey’s meditation cave amid many miraculous signs on the tenth day of the ninth month of the Wood Mouse Year, or 6 November 1924. At the age of four Rinpoche was taken to visit Dzatrul Rinpoche, Ngawang Tenzin Norbu (1867–1942), a close disciple of the previous Trulshik Rinpoche, and during this visit many memories of his previous life arose in his mind. As he recounted these memories, Dzatrul Rinpoche became convinced that the young boy was the incarnation of his teacher, and so he recognized and enthroned him, gradually transmitting all the teachings of his predecessor.

Trulshik Rinpoche studied extensively at Mindrölling Monastery in Tibet, a learning center of the Nyingma tradition, where he received full monastic ordination according to the Vinaya lineage of Lachen Gongpa Rabsel. He became one of the principal holders of this rare Vinaya lineage, and because of his ability to keep and sustain the purity of the Vinaya lineage, he gave full and novice ordination vows to thousands of monks and nuns. Not only did Trulshik Rinpoche study these important teachings, he put them into practice by completing several three-year retreats, altogether spending about 60 years of his life in closed retreat. After Dzatrul Rinpoche’s parinirvana, Trulshik Rinpoche became abbot of Dzarong Dongak Chöling monastery, where he upheld and propagated the Buddhist teachings.

Following the Chinese invasion in 1959, Rinpoche traveled with his followers to a safe haven in the valleys south of the Mount Everest area, among the Sherpa people of northeastern Nepal. Thubten Chöling, the monastery he founded there, is renowned today as one of the most important centers for the monastic tradition of the Nyingma school of Tibetan Buddhism. Trulshik Rinpoche was also the teacher of many other great masters, including His Holiness Sakya Trizin, and transmitted the Treasury of Rediscovered Teachings to the Gyalwang Drukchen at Thubten Chöling. He bestowed several major cycles of teachings to Dilgo Khyentse Yangsi and Dudjom Yangsi Rinpoches and other lineage-holders of all the schools of Tibetan Buddhism at Shechen Monastery in Nepal, including the Treasury of Oral Instructions, the Canonical Scriptures of the Ancient Tradition, and the Four Branches of Heart-Essence.

In his later years Trulshik Rinpoche traveled all over the world, and many lamas of all traditions regarded him as a unique reference point, revered for his vast learning, his integrity, his disarming simplicity, and his unequaled realization and profound spiritual experience. He visited several countries in Asia, including Japan, Thailand, and Malaysia, and also traveled to the West, visiting the United States and many countries in Europe. Rinpoche visited France on numerous occasions, giving many empowerments from the discovered treasures of Kangyur Rinpoche, Dilgo Khyentse Rinpoche, and Dudjom Rinpoche, and instructing three-year retreatants and other disciples in the Dordogne. Kyabje Trulshik Rinpoche continued to work for the benefit of the Dharma and beings well into his eighties, and despite his gradually failing health during his final years, he continued to instruct disciples both in Asia and in Europe, and spent time at Thubten Chöling monastery with his large community of monks, nuns, and retreatants.

His direction of the annual Mani Rimdu festival of masked dance-drama is documented in Richard Kohn's film Lord of the Dance, Destroyer of Illusion (1986), the title of which is partly derived from his name, Trulshik Rinpoche, Precious Destroyer of Illusion. In 2010 he became the fifth head of the Nyingma school, succeeding Kyabje Minling Trichen Rinpoche, who had passed away in 2008. Kyabje Trulshik Rinpoche passed away peacefully at the age of 87 on 2 September 2011, in his residence just above Sitapaila monastery. His reincarnation, Ngawang Tendzin Lodrö Rabsel, was born in Kathmandu on 25 July 2013 and recognized by HH the Dalai Lama on 9 July 2015. He now resides at his Sitapaila monastery, where he will soon start his training and studies. 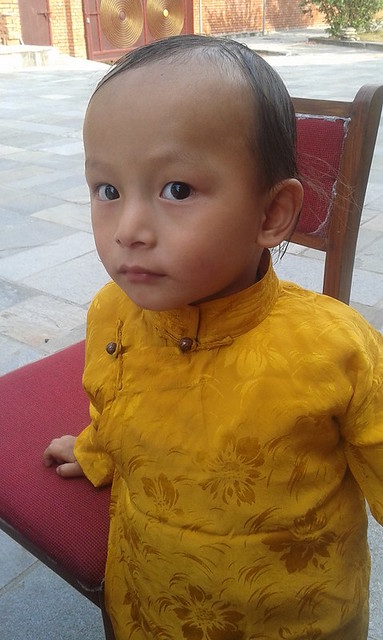 This article was compiled by Ani Jinba Palmo based on oral stories and a written biography composed by Trulshik Rinpoche’s nephew and chief attendant, Kusho Ngawang Tsephel.

Born and educated in Holland, Ani Jinba Palmo is a nun in the Tibetan Buddhist tradition. She ordained in India in 1969. Following the parinirvana of HH Dilgo Khyentse, who was Ani Jinba’s root teacher, a group of Trulshik Rinpoche’s students from Switzerland asked her to translate for them so that they could receive teachings from Trulshik Rinpoche twice a year. She did so in various places, such as Thubten Chöling, Maratika Cave, Boudhanath, Dharamsala, Switzerland, and Sitapaila, between 1992 and 2005. She has also translated a number of books, including The Great Image: The Life Story of Vairochana the Translator (Shambhala, 2004) and Brilliant Moon: The Autobiography of Dilgo Khyentse (Shambhala, 2010).