A Garland of Views* couples the root text of a key chapter in the Guhyagarbha Tantra (The essence of secrets tantra), the primary tantra of the Mahayoga division of the most ancient (Tib. Nyingma) tradition of Himalayan Buddhism, with an insightful commentary on the text by one of the most renowned figures in Tibetan Buddhist history. The book gives an overview of the nine-yana (Tib. thekpa; “vehicle”) division of Buddhist practice, but formulated differently to the way it is usually presented in this tradition. The entire Buddhist path leading to awareness lies nascent in these pages, and I view A Garland of Views as the alpha and omega of Tibetan Buddhist teachings. That may be why at least five translations of this seminal text are currently in print, of which the edition under review here is the most recent.

Part One, the root text, is notable for both its brevity (a mere 13 pages, in English) and the fact that the revered 8th century tantric master Padmasambhava (Guru Rinpoche) composed it by his own hand. That Padmasambhava wrote the text himself is important, which is discussed in greater detail below. As for the brevity of the text, this is deliberate; Padmasambhava declares that he wrote A Garland of Views as “a memory aid summarizing the distinctive features of the views and vehicles” (p. 3), and the work does indeed lend itself to memorization.

Part Two consists of a powerful and trenchant 79-page commentary, in English, on the root text written by the brilliant Tibetan scholar and bodhisattva Kyabje Jamgön Mipham (1846–1912). Intimately connected with the 19th century Rime or ecumenical movement, Jamgön Mipham thus received teachings from masters of all lineages.

According to Nyingma orthodoxy, the corpus of Buddhist learning is bifurcated. The first thread of the tantras is called Kama, and is comprised of both written and oral teachings of various provenance, originating from teachers and visionaries dwelling in the nirmanakaya and sambhogakaya realms of existence and passed down in an unbroken line through history. The second thread is that of Terma, which are spiritual treasures, including sacred teachings, that have been secreted in the mind stream of a future Buddhist prophet or sometimes in a natural setting (such as buried in the ground, encased in the heart of a boulder, in the pith of a tree, of even in the depths of a body of water) by Guru Rinpoche and a few of his closest disciples.

A Garland of Views is an example of a Kama teaching, and is, in fact, Padmasambhava’s sole guidance committed to writing and the only text in the Nyingma Kama collection attributed to him; all his other teachings belong to the category of Terma. That Padmasambhava initiated an oral transmission lineage with A Garland of Views vivifies it for me. To say that an oral tradition is a living tradition is axiomatic, and knowing that I am reading the words as Guru Rinpoche wrote them is powerful indeed.

According to both Nyingma orthodoxy and A Garland of Views, the first three Buddhist paths fall under the nomenclature of the “vehicle of characteristics” (p. 41) and are translated here as the Listener Vehicle, the Solitary Realizer Vehicle, and the Bodhisattva Vehicle (the cornerstone of the Mahayana path). All three fall under the heading of Sutrayana, the sutras being the discourses Shakyamuni Buddha gave during his lifetime. 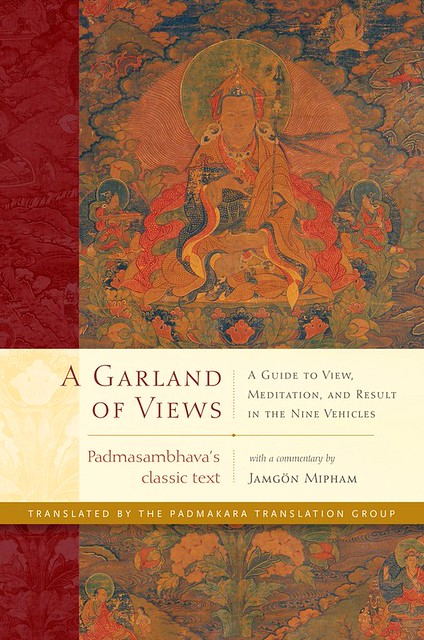 The next six divisions in the Nyingma schema, which Padmasambhava refers to as both the “Diamond Vehicle” and the “Mantra Vehicle” (both, p. 50), are placed into two broad categories, known conventionally as “Outer Tantra” and “Inner Tantra.” Outer Tantra is further divided into Kriyatantra, which emphasizes practices of ritual, mantra repetition, and visualization; Ubhayatantra, emphasizing meditation; and Yogatantra, which combines practices of the Kriyatantra and Ubhayatantra.

In his commentary, Mipham explains the difference between the Sutrayana and the Diamond Vehicle thus: “The vehicle of characteristics teaches the general and the specific characteristics of phenomena and the characteristics of total affliction and complete purity separately and distinctly, showing what is to be abandoned and what is to be adopted. The Diamond Vehicle teaches that total affliction and complete purity are essentially inseparable and unchanging as the mandala of the enlightened body, speech, and mind” (p. 41).

The usual presentation of the nine Nyingma yanas, on the other hand, is as follows:

1. Sutrayana, comprised of the Listener and Solitary Realizer vehicles and the Mahayana (“Bodhisattva”) Vehicle

2. Tantrayana, comprised of the Path of Purification (Kriyatantra and Ubhayatantra), the Path of Transformation (Yogatantra, Mahayoga, and Anuyoga), and the Path of Self-Liberation (Ati [commonly, Atiyoga], or Dzogchen)

Neither of these two schemas is in any way superior to the other. Unfortunately, and surprisingly, the reason behind this variation is not addressed in A Garland of Views.

Preceding the main topic of A Garland of Views, which is the nine yanas, Padmasambhava and Mipham Rinpoche describe four non-Buddhist paths of the human realm. These descriptions are interesting and at times, even wryly amusing. Padmasambhava says of non-Buddhists, “They are completely confused” (p. 3), while Mipham adds, in his commentary, that they are “utterly ignorant and bewildered” and, in a memorable turn of phrase, that they believe things “come into being just like that, like mushrooms in a field or bubbles on water” (p. 35).

I highly recommend this excellent translation of the seminal text “A Garland of Views” to readers interested in an overview of the nine-path division of the Nyingma tradition of Buddhism. First of all, Padmasambhava’s root text is presented in a non-technical manner that is accessible to readers with only a basic understanding of Buddhism. Second, Mipham’s straightforward explication of the root text is likewise comprehensible to interested readers, and at times even poetic, as when he rhapsodizes about the exquisite Ati (Dzogchen) teachings. This is a superb book, and I know that I will read it over and over again.

NOTE: In addition to the text in English, A Garland of Views includes both the root text and Mipham’s commentary in Tibetan.

A Garland of Views: A Guide to View, Meditation, and Result in the Nine Vehicles, by Padmasambhava, with commentary by Jamgön Mipham, was published by Shambhala Publications, Boston and London, in 2015 (released April 2016). Translated by the Padmakara Translation Group