Lama Tenzin relaxing with a teacher and a volunteer. Image courtesy of the author

As the resident lama of one of the largest Buddhist centers in Toronto, Tenzin Dakpa has his work cut out for him. Besides running the Karma Sonam Dargye Ling Buddhist center, he offers many services to the local Tibetan community, including officiating marriage ceremonies, offering grief counseling, and even functioning as a mediator in minor familial disputes.

There is one project, however, that he holds close to his heart: teaching the Tibetan language to young Tibetans. After having spent nearly two decades in the West (he was born in Nangchen, eastern Tibet, in 1978), he has seen how the children of Tibetan refugees struggle with the language of their forefathers.

He tells me over a breakfast that the Tibetan language is critical for the survival of the Tibetan people and culture, not to speak of the fact that it is also the language in which much of the Buddhist teachings are preserved.

Once we had finished our meal, he drove me to the Tibetan-language summer school that he has started. Nearly 75 children were taking the summer course, divided into three classes. The teachers had different backgrounds: some were monks, while others were laypeople trained in the Tibetan language and literature in India. Although some of the students lose their Tibetan language skills over the course of the school year, they quickly regain much of what they have learned when they come back to the summer course, one of the teachers tells me. Students are taught the Tibetan alphabet and grammar, with an introduction to basic Buddhism in the latter stages of the course. “I think we should go out there and do social work rather than simply meditate and pray in our rooms,” Lama Tenzin says, noting that he believes there should be no separation between life and the Dharma.

For this reason, Lama Tenzin has made it part of his obligation to help the community preserve and maintain not only their Buddhist beliefs but also the Tibetan language, for the two are closely interlinked. Lama Tenzin has plans to create a daycare center for children, where he can introduce them to Buddhist practice and the Tibetan language at an early age, which, he believes, is ideal. 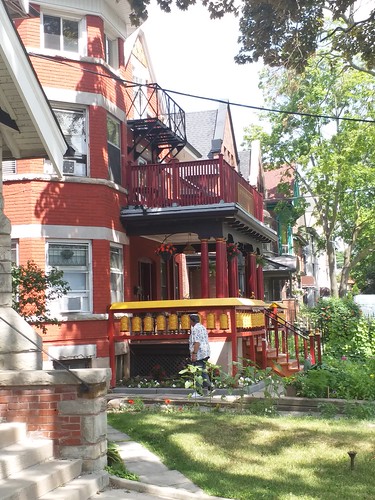 Besides helping with the education of children, Lama Tenzin fulfills his role as a Buddhist chaplain for the 6,000-strong Tibetan community in Toronto. Many Tibetan immigrants move to Canada from India and Nepal, lured by hope of a better future for their children, creating one of the most dynamic Tibetan communities in the West. But it is not all blue skies; I was told that in recent months the community had witnessed at least two suicides.

Lama Tenzing’s Buddhist center offers a source of spiritual sustenance for the community. I see elderly Tibetans circumambulating at the center at noon, turning the praying wheels installed outside the Dharma center. It is no surprise that Lama Tenzin is planning to build a Buddhist monastery on the plot where the current Buddhist center (and the neighboring house) stand. He explains that the application is being processed, but he is concerned that the place might be a bit too small to become a full-fledged monastery. Because of this, he has been looking to buy houses in the vicinity but that has also turned out to be easier said than done.

He currently supports the center by renting out the large Victorian house (which has nearly 19 rooms) that stands next to the Dharma center. It brings in enough revenue to support his activities. He is quite skeptical of charity and asking for donations because he believes that spiritual organizations should be able to support themselves. “How long can we keep on begging? I think we should do business, and the real estate is the best business,” he notes. Tibetan language class in session. Image courtesy of the author

Besides his spiritual vocation, Lama Tenzin also maintains an interest in literature, something that I recalled we discussed at our first meeting several years ago. As part of his Dharma center, he wants to create a center for translation that would make great works of foreign literature available in Tibetan. He tells me that he would also love to start a publishing company that would publish the translated works and make them available for free to readers in both print and in e-book formats.

He has a retreat center in Peterborough, an area just outside Toronto, which he says would be a good place for the translation committee to hold an annual gathering during the summer. Thanks to his determination and entrepreneurial acumen, Lama Tenzin, it seems, has come a long way from his humble roots in Eastern Tibet.

Building a Buddhist Monastery in North America: An Interview with Dungsey Lama Pema
Lost in Translation
Khenmo Konchog Nyima Drolma: Serving the Dharma and Sowing the Seeds of Monasticism in the West
Founding a Landmark of the Dharma in Canada